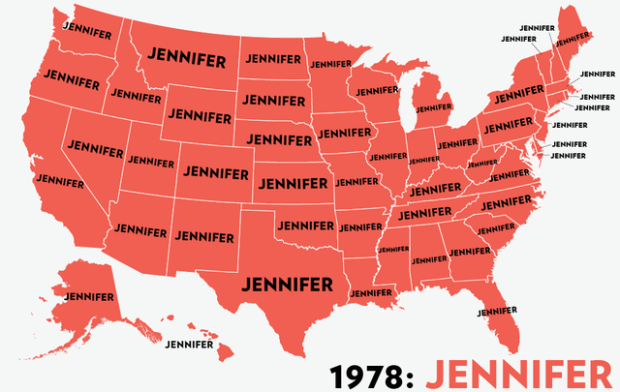 (Above: Map of most popular girls’ names by state forty years ago.)

I was having some fun on my radio show last week. (I should mention: there is now a weekly radio show.  It’s called “Rock School with Len,” and it airs Thursdays at 10am Eastern on WCKS Radio, the student station at Grand Valley State University. I’m the faculty advisor for the station, so my show is a combination of radio show/”office hours.”) Each week I pick a theme and look for songs to fit the theme. Last week was “Rock and Roll By The Numbers,” and each song title had a number in it somewhere. My favorite set was the sevens, which included “7 O’Clock” by the London Quireboys, “7 Rooms of Gloom” by the Four Tops,” and “7 and 7 Is” by Love. (Can we have a radio station that plays all of these all the time?)

In the process of digging out records, I was reminded of “27 Jennifers” by Mike Doughty. It’s a sort of comedy record that isn’t; it’s a serious song, but when you think about the subject matter, it’s pretty amusing. If you are a certain age, you probably had at least that many in your class. We didn’t have a lot of variety among the names in my grade school. If you were a guy, you were likely named John or Dave or Bill or Mike. (My best friends growing  up include all of the above.) Girls were of course named Jennifer or Debbie or Lisa or Karen, with Marie as a middle name, since I think that that was the default put onto birth certificates at the hospital. If you run across a meme on Twitter that’s mocking a woman of a certain age, there’s a good chance that it uses one of those names in it.

And yet how quickly we forget that names are trendy. Today you’ll see people with nothing better to complain about bemoan the onslaught of Olivias and Madisons with their various spellings.  This semester, I have one in each class that I teach. Perhaps the song needs a reboot: “I went to school with 27 Madisons… 16 Maddies….” begins to fit the meter perfectly. Today’s college students were born in the late 1990s, if they are of a traditional age. They’re likely named, if girls, one of the above plus McKenna/McKenzie/McKayla and Jordan. Guys are named Ethan, Zach… and Jordan. And no, it’s not any more of a problem now than calling out the name “Jennifer” was in 1978 and having half of the room look up.

One thing is constant: there are no Lens. I went to high school with 2200 people and was the only one. It was quite convenient in that if you heard the name, you knew who they were talking about. My father and both of my grandfathers had the name, so I was pretty much doomed. I do not have a son, but if I did, I’d probably name him Jennifer before Leonard. Sometimes you have to break a cycle.

How many were in your school? You can hear “27 Jennifers” by clicking here.