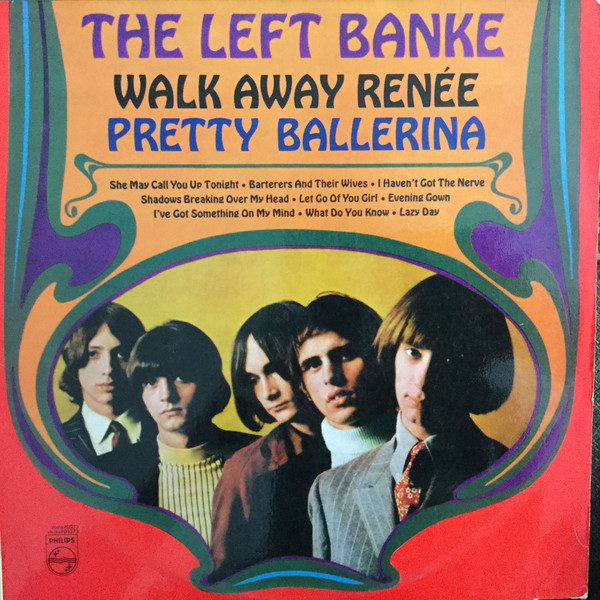 (Above: An Album I have yet to find, but need.)

Today I debut a tag for articles that I’ve been kicking around for a while now – “Pop Perfection.” I think of it often when I’m driving, and I hear a song, and I think “Man, that’s absolutely perfect, and I don’t have to think really hard about it” (other than to say “I can’t create that”). The 1960s gave us a lot of simple pop that, when you think about it, was really expertly assembled, and in just two and a half minutes delivered pure musical bliss. (It happened in later decades as well, but took longer than 2:35.)

I thought of no better song to start with than one that has haunted me for over thirty years now, since I discovered it right after high school. The Left Banke formed in New York, NY in 1965, giving us two hit singles and a few also-rans that probably shoulda been hits. As is so often the story, the band laid down their tracks, split up, had a hit get discovered, and then needed to pull it together so as to appear to be working. Such was the case when “Walk Away Renee” hit in 1966.

The real Renee exists. She was Renee Fladen, girlfriend of bass player Tom Finn.  The problem? Michael Brown, the leader of the band, wrote the song for her because he liked her. A lot. Enter tension, but exit a hit record. “Renee” hit #5 for the band and paved the way for a follow-up, “Pretty Ballerina,” which made it to #15. Oldies radio hasn’t been kind to “Pretty Ballerina,” since its starts and stops make it a little tricky for the fast-pace of today’s Top-40-sounding-Classic Hits format. But it’s also a great song. The songs that rounded out the album didn’t fare as well on the chart, but one of them, “She May Call You Up Tonight,” will always get added to any 1966 playlist I make. (God help you if I’m spinning singles with a cocktail or two, or I’m going to explain how it should have been huge.) It turns out that Miss Renee was the subject of all three of these songs, which likely prompted the bass player to look over the top of his shades often. (It may also rank her up there with Patti Boyd Harrison Clapton, who had “Something,” “Layla,” and “Wonderful Tonight” written for her.  Bigger hits, sure, but the insipidness of the last one removes points in my book.)

I discovered “Walk Away Renee” in the fall of 1986. I was fresh out of high school, fresh out of my first romance (well, by a few months,) and got a fresh copy of a Hits-of-the-60s type CD that featured a lot of songs for little money. Fortunately, it wasn’t one of those Sessions Records specials that sold a lot in the 80s where they got the bands back in the studio to re-record their hits in the key of Asia Minor. No, these were the real records, and I had some new ones to learn. I heard “Renee” and was mesmerized. The pain of seeing the familiar places, now alone, hit hard. The memories were fresh. I was seventeen nostalgic for being sixteen, and this record hit at just the right time. That same fall Southside Johnny and the Asbury Jukes did a passable cover version as well, and I immediately picked it up.  (Of course, then I found the Four Tops, and there was no need to entertain any other covers.) Years later, I of course added it to the oldies stations I programmed, despite the fact that neither song charted well in Chicago. At WJMK I had the general manager, coffee cup full of vodka in hand, standing in my doorway shaking his head when “Ballerina” hit the airwaves. I didn’t flinch.

“Walk Away Renee” is pop perfection. You hear it, you relate, and it makes you simultaneously nostalgic and happy. There’s a time and place attached to it, it’s different for each of us, and yet it’s eerily similar.

Your turn to see the sign that points one way.  You can hear “Walk Away Renee” by The Left Banke by clicking here.