(Above: I may have a similar shirt, but that hair ain’t comin’ back.)

In the two years I spent as an undergrad at Lewis University from 1987-1989 before setting out on my own to try and start a radio career, I probably spent more time in the radio station than anywhere else, including classrooms. One of the things that you learned early at our school was that opportunity went first to those present, and the more you were present, the more opportunity you had. We were also given a slate of television production courses as a part of our broadcasting major: it was explained to me that “you learn radio, and then you want to do television.” I didn’t want to be in television, but – damned those opportunities – realized that maybe there was some interest on my part.  Most of the opportunities were of the crew type – here, hold this camera – but every so often you could get on television.

The Lewis University Television Network was a limited-schedule cable system that ran to all of the dorms and academic buildings on campus. During the day it ran a message board system (with WLRA, the campus radio station, playing in the background) and at night we aired the shows that students created. Among the offerings during my time: Steve’s Pix, which was a movie review show hosted by Dr. Steve Berger, a computer science professor who liked to associate with the broadcasting students (and we liked having him around); Past My Bedtime, our attempt at replicating Late Night With David Letterman; and, of course, the inevitable intercollegiate sports coverage. There was one more show: Network Video Hour. It was our own version of MTV, with music videos surrounded by witty repartee.

I got to appear as a host on NVH three times. The first time was the first semester of my freshman year. It represents my first time on television anywhere, not counting camcorders brought out at parties. If I remember correctly, I got asked that afternoon right before production time to go on the air, which explains why I’d be wearing a black sweatshirt in front of a black background. 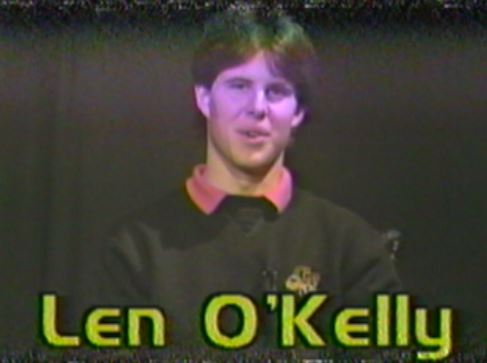 (The pink collar, though, is pretty sweet.)

The second time I co-hosted with my good friend Chuck. Chuck and I were quite often up to no good around the station my first year there. We met in Intro to Radio class in the fall of 1987, and – well, let’s just say I’m the godfather to one of his kids. He’s one of the few people I’ve been in constant contact with since my college days. Our television hosting? If either of us decide to run for office, I need to burn the tape.

The third time was to be the charm. In the fall of 1988 I was hosting the morning show on WLRA several times a week (there’s been a variety of posts here about that). I had just accepted a weekend job at WJTW in Joliet that would begin November 12, and the station was abuzz with this news. On November 3rd I went in to the LTN studios, full of ego and armed with a slew of Hawaiian shirts, to tape the show for the week of the 6th. That would be my gimmick: in addition to the smarmy personality I brought each morning, I’d change my shirt after each video to see if anyone noticed. Get it? Comedy jokes! Basically, the whole modus operandum here was “just do your morning show at night, on TV.” What could possibly go wrong?

One of the responsibilities of the host was to program all of the music videos for the show. As if the on-camera time wasn’t self-indulgent enough, I also got to subject viewers (more likely “viewer”) to an hour of “music” that I thought was fun to play. For my episode, I abused this power tremendously.  I’ve dug out the episode, since I’ve saved far, far too many things from college broadcasting. Let’s cringe together, shall we?

-The show opens with our new and trendy graphics package. The words “Network” and “Hour” appear on a grid, while the word “Video” swims by repeatedly. Remember – there’s no PCs yet. This was something that Ed Green, one of our professors, figured out how to do in the Chyron. Given the time, it’s pretty snazzy, especially when you consider how everything else about this show looks. The normal theme song for the show, which I think was “Genius of Love” by the Tom Tom Club, has been replaced with “I Like Bananas (Because They Have No Bones)” by the Hoosier Hot Shots, the opening theme I was using for the morning show that fall for some reason.

-There I am. The first shirt is a blue Hawaiian shirt, and I am wearing a pair of sunglasses that come apart as I go to take them off. Setup for the first video is songs that you use to “jag” people, which I think means to call them out. It must have been an ex-girlfriend that motivated the choice, and the video is a live performance of “Train in Vain” by the Clash.

-We come back with audio from the radio station briefly (it’s ‘Til Tuesday’s “Everything’s Different Now”), and it’s a black floral shirt. (“Her name was Jennifer, just for the record.” I was right about the jagging.) We go to Monty Python next for the “Tobacconist” sketch. We were in the habit of uttering the phrase “My hovercraft is full of eels” around the radio station, so this video is an elaborate inside joke that no one in the audience who didn’t hang out in the radio station could have possibly gotten.

-Yellow shirt. The next video is actually one of the most creative things I did in college. We played John Cougar’s “Jack and Diane” – the video with the black boxes – and created a box that I appear in, waving, during the middle of the video. For shooting this “live to tape,” it’s not a bad trick for student TV in 1988.

-Next shirt is really tropical. It’s better than the video that follows it, which is the Temple City Kazoo Orchestra’s version of “Also Sprach Kazoostra.” “If you have a kazoo in your dorm room, go ahead and play it.” Imagine my surprise years later finding airchecks of Ron Britain on WCFL getting people to play kazoos into the phone back in 1967.

-The video was too short for a clothing change. I’m apparently frustrated with the camera crew and heavy metal music in general, echoing the fact that this entire hour is ad-libbed save the videos. “Two guys with garbage bags, dead fish, and an idea” lead us into Barnes and Barnes’ “Fish Heads.” I can’t imagine anyone watching this this far into the show.

-The video is followed by the first PSA break. Ads reminding people to vote, McGruff the Crime Dog leading an anti-drug sing-a-long, a reminder to city kids not to light the forest on fire, and a montage of presidents being sworn in to commemorate the Constitution. I think McGruff should make a comeback.

-Orange and purple shirt back from the break. The message was “probably a dope-smokin’ thing,” I suggest. In the intro for the next video, I explain that watching Belinda Carlisle trying to dance “is a better PSA than any anti-drug thing we can show you.” The song is The Go-Gos’ “Head Over Heels,” which is still fantastic.

-Back to the original blue shirt. “A couple of fat girls dancing around,” the host says, and we see just how old this show is if a joke like that was able to clear the censors. “I was a video short, so I asked Mary Lynn, the director, for one.” It’s Crowded House’s “Better Be Home Soon,” which is from the new album Temple of Low Men, apparently.

-The shirts are in sequence – it’s back to the black one. “You’d better be home soon, or I’ll kick your ass,” the host says. Next video has another story to set it up.  “Once upon a time, there was this big guy. Got women, though.” That guy was Meat Loaf, and the clip is “Paradise By the Dashboard Light.” Edgy. Remember, this is a Catholic school. It’s the clip from the now-famous live concert.

-A nifty video effect reveals the Bat Out of Hell LP cover, and then the host back in yellow. I’m explaining that that’s Mokena, Illinois resident Karla DeVito in the video, but I think the LP credit for female vocal is Ellen Foley. “Local girl makes Meat Loaf” into another PSA break. This one is for the Air National Guard. (I’m actually correct here – that is Karla DeVito lip-synching over Ellen Foley’s vocals. Score one for the show’s producers.)

-Whoa. Out of the PSA comes the video for “Who Put Timmy In the Trash” by Royd Rogers and His Whirling Butt Cherries.  Do I need to explain this any further than that? (Although the line “So, those kids on milk cartons? They might be in the trash” is more than a little cringe-worthy.) Another inside joke follows about a guy at the station named Tim, who hosted the show the week prior.

-I really wanted to show the video for T’Pau’s “Heart and Soul,” but the only place I could find it is from the episode I hosted a year earlier. A talk about rock and roll crushes begins: Debbie Gibson, Kylie Minogue, and “this chick.” (The name Lita Ford is thrown out, and I suggest that she’d “probably break your arms in a sexual situation.”) This song is still great, and I now know that the lead singer of T’Pau is Carol Decker.

-The video comes back with a shot of the buttoned-down short-haired black-sweatshirted version of me from a year earlier, and there is screaming. It’s back to jokes about Tim playing air guitar while we stretch for the last video to be cued up. The ending of the show is Monty Python’s “Flower Arrangement” and “Spam” sketches. The final one has the show credits over it, which have changed the names of everyone on cast and crew to combinations of Spam, ending with the title slide for the Spam Television Network and the audio from “Hooray for Captain Spaulding.” I vaguely recall that of everything that was said and done in this episode, the powers that be were most upset about the change of the logo than anything else. (I can tell you that if my students offered up some of what passed for jokes here, we’d be having a talk about “responsible use of media.”)

-Bonus: the show ended with an ad for the school’s fall formal dance. It’s four girls sitting around in a room talking about the dance in a concept that is stolen from the 1988 Izusu ads with Joe Isuzu and graphics saying “He’s lying.” It’s worth watching just for the hairdos, which are great examples of what we called “708 hair” – 708 being the new area code for the Chicago suburbs that went into place around that time.

Every episode of Network Video Hour aired each night for a week.  I remember walking through one of the campus buildings one night, seeing the show on the TV, and turning the other way so as not to be recognized.  It was to be radio for me from that point forward.

Yeah, it’s digitized, and not for the faint of heart. You can see the same Network Video Hour that aired in the Lewis University dorms the week of November 6, 1988 by clicking here.