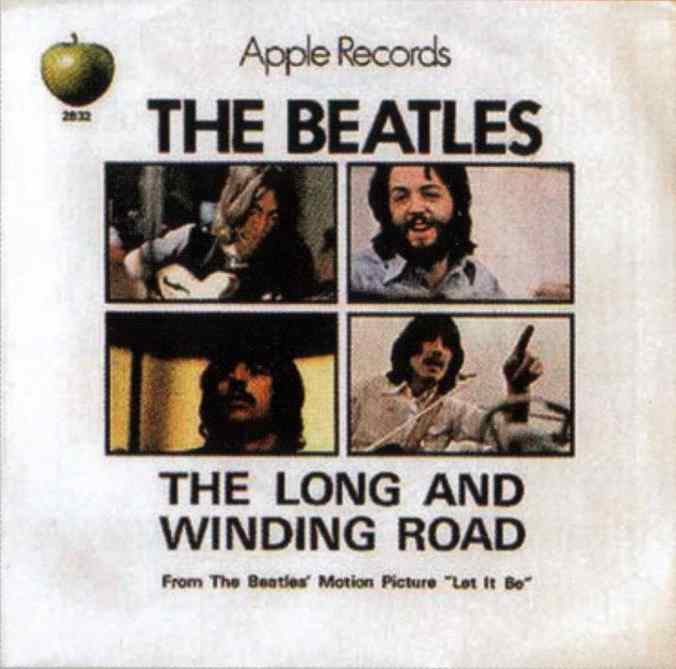 It’s the date that Matt Flynn, the drummer for Maroon 5, was born. Two days later Lindsay and Sidney Greenbush were born. The twins played the role of Carrie Ingalls on Little House On the Prairie.

May 25th is also the day that the first sale of a desktop computer took place – the Datapoint 2000. General Mills (the cereal company) bought 40 such machines from Datapoint. The computers had 8K of memory and tape drives that could hold up to 130 KB of data. (In other words, the 32 GB flash drive you have on your keychain could hold the same data as a quarter million of these machines.) They retailed for $1280 each in 1970 dollars, or about $8700 today.

On the charts: it’s the third and final week at the top for “American Woman/No Sugar Tonight” by The Guess Who. Next week it gets a little less cool up here, so enjoy it while you can.

Making their debuts this week:

“The Long and Winding Road”/”For You Blue” – The Beatles (debut at #35). It’s fairly rare to see a record debut inside the Top 40. This isn’t an ordinary record, largely due to the band in question. As the swan song for The Beatles, it’s no surprise this jumped as high as it did. It will go on to spend two weeks at the top, the last song for the band ever to do so. It always felt like a perfect ending to me: the lush orchestration at the end signaling “That’s all, folks.”

“Gimme Dat Ding” – The Pipkins (#65). If you are a fan of The Benny Hill Show, I don’t need to say anything else about this record, except maybe that it sounds a little better sped up with people running around. This eventual #9 hit features Tony Burrows, who sang on basically every Britpop piece in the early Seventies: White Plains, Edison Lighthouse – and his own record, coming up in a few weeks.

“Who’s Gonna Take the Blame” – Smokey Robinson & the Miracles (#73). I’ll hazard a guess that you forgot about this one. It makes it up to #46, because, well, when Smokey sings…

“Spirit In the Dark” – Aretha Franklin (#74). It’s quite the A-list of performers we have this week, isn’t it? Here’s one that you NEVER hear anymore, despite the fact that it goes on to be a #23 record. Regionally, it’s a #3 record on KFRC/San Francisco and makes it to #7 on WDAS in Philadelphia.

“I Want To Take You Higher” – Sly & the Family Stone (#76) and “I Want to Take You Higher” – Ike & Tina Turner & the Ikettes (#78). Flip a coin here – heads you win, tails you win. Both versions of this are outstanding, with perhaps an edge going to Sly for taking it to five minutes. S&tFS originally charted with the record on May 24th, 1969: this re-release is more successful, making it up to #38. But the hit version? Ike and Tina, landing at #34.

“Ball of Confusion (That’s What the World Is Today)” – The Temptations (#80). Rap on, brother. This is a song, like “Give a Damn,” that I could drop into a media history lecture and let it speak for itself. It’s uncanny how much of what’s represented in the lyrics of fifty years ago is still relevant today. Change the line to “unemployment risin’ fast Taylor Swift’s record’s a gas” and no one could tell. This will spend three weeks at #3, unable to move any higher.

“Mama Told Me (Not To Come)” – Three Dog Night (#83). Randy Newman wrote this one. The trick, in playing it on the radio, is having the will power to let it go all the way to the very last note. This will eventually get all the way to the top of the chart and stay there for two weeks, the band’s first of three Number Ones.

“Free the People” – Delaney & Bonnie & Friends (#84). This ends up being the B-side; the later release of the flip, “Soul Shake,” does better in August. This gets up to #75, spends four weeks on the chart, and then fades away.

“Man of Constant Sorrow” – Ginger Baker’s Air Force (#88). You’ve no doubt heard this song – more likely as included in O Brother, Where Art Thou? – but you may not be familiar with this version. Recorded live at London’s Royal Albert Hall, it features Denny Laine, later of Wings, on vocals. It will spend two weeks on the chart and move only three places.

“Ain’t That Lovin’ You (For More Reasons Than One)” – Luther Ingram (#95). Now make it mellow. This one just misses the 40, stopping at #45. It’s a top ten record in Baltimore, Philadelphia, Detroit (on both WKNR and CKLW), and Cincinnati.

“Westbound #9” – The Flaming Ember (#97). Speaking of Detroit – this group from Motown (that recorded for Hot Wax, a Buddah Records subsidiary) only hit #24 with this one. But, of all the singles this week, I think this is the one I played both loudest and twice. I can’t call it “oh, wow,” but you might. Regionally, this was a huge record in some places. #1 in Washington DC. KHJ and KRLA/Los Angeles played it at #3. WLAV/Grand Rapids had it up to #5, while WLS/Chicago only advanced it to #21 (and not until July).

“Spill the Wine” – Eric Burdon & War (#99). We’ll make this the “oh wow” for the video. Sure, you’ve heard this song, but have you seen it? If not, you may be surprised just how great War is as a backup band, and how Eric Burdon isn’t discussed quite enough. This will spend one week at #3.

“Freedom Blues” – Little Richard (#100). I mentioned this one a few weeks back when Little Richard passed away, so you may wish to check that out. This makes it up to #47 and spends two months on the charts. On KLIV in San Jose, it’s a #1.