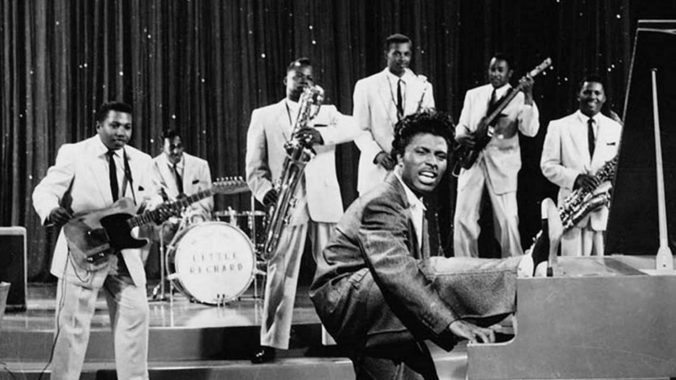 Richard Penniman passed away today at the age of 87. Like anything about Little Richard, that sentence doesn’t tell the whole story.

Little Richard began his recording career in 1951 with RCA Victor. His early sides for them, including “Taxi Blues,” didn’t go anywhere on the charts. But in 1956 the world changed. Richard, recording for Specialty Records, launched a series of singles that while not pop chart toppers changed the face of rock and roll. His first charted hit, “Tutti Frutti,” managed to make it up to #17 on the white-dominated pop charts of that year. (The song you know was quite sanitized; the original lyric of “Tutti Frutti, good booty” was not going to garner airplay.) The opening salvo to that song – “A wop bop a loo bop, a wop bam boom” is rock and roll. (How many kids saw Grease in 1978 and didn’t know Little Richard was responsible for that line and not Danny Zuko?) The second hit is the one I’ve chosen to profile here, and the one that turned out to be Richard’s biggest. More on that in a second. Those are rock songs that make up part of the classic canon of the genre, but they don’t even represent Little Richard’s total output for 1956. Add “Slippin’ and Slidin,” which made #33, and “Rip It Up,” which peaked at #17, and that’s a pretty good year. (The flip side of “Rip It Up,” “Ready Teddy,” almost made it as well, stopping at #44.)

The hits just kept on comin’ in 1957. Fueled by the film of the same name starring Jayne Mansfield, “The Girl Can’t Help It” peaked at #49. The next record, “Lucille,” topped the R&B chart for two weeks despite only peaking at #21 on the pop side. Why? Simple. Most of these tunes I’ve mentioned thus far have safe, sanitized versions by white artists that radio stations already nervous about rock and roll felt more comfortable airing. You more likely heard Pat Boone warble his way through the tunes, or Bill Haley’s version of “Rip It Up” (complete with that horrid silly voice at the beginning), or the Everly Brothers’ twangier version of Lucille. You can’t tell the story of Little Richard’s music and leave race out of the discussion.

By 1958 Little Richard was appearing in Alan Freed movies as himself, and that was helping to sell records. “Keep a Knockin’,” a song that I cannot think of and not picture the film version of Christine, made it to #8 while “Good Golly Miss Molly” peaked at #10. Throw in “Ooh My Soul” at #31 and that’s a solid year for any performer.

That was it. After “Ooh My Soul” Little Richard never again hit the Top 40.  After 1958 Little Richard became Richard Penniman again, pushing the Bible door-to-door. According to legend, Little Richard saw a shooting star and took it as a sign from God to leave rock and roll behind. (It may have been Sputnik, for all we know.) Penniman quit the music business, earned a degree in theology in 1961, and became a minister for a while. That phase was short-lived, and he was back to making records by 1963, though  with no real chart success. Oh, he came close: in 1970 his version of “Freedom Blues” made it all the way to #47. The closest approach was in 1986, when a song from Down and Out in Beverly Hills called “Great Gosh A’Mighty!” peaked at #42. I almost  – almost – picked that one for the blog because it’s not a bad record and I’m betting most people forgot about it. That, and I love it. But, it also seemed irresponsible not to pick the one that I did.

If I was tasked with preparing a short list of records that would explain rock and roll to people who were for some reason unfamiliar with it, there’s a short list of songs that make the cut. I explained similarly when Chuck Berry died that you include him, and I say the same thing about Little Richard. There’s just something so perfect about “Long Tall Sally” – it’s wonderfully raucous and dirty and salacious and infectious. Go ahead and dig up Pat Boone’s attempt at the recording (a #8 hit), and listen to how he tries to sing “and he ducked back in the alley.” Now listen to how Little Richard does it on the #6 hit that also spent two whole months at #1 on the R&B charts. That one line is all you need to know about who was the real deal. Still not convinced? Look up the Beatles’ version. No Little Richard = no them. Look up the fact that Robert Zimmerman’s high school yearbook in 1961 listed his ambition as “to join Little Richard.” Hell, when I got my first compact disc player in 1985, one of the initial discs I put in the library was a Little Richard anthology because it needed to be there. Without Little Richard, we don’t have rock and roll as we know it. On one hand, I think Richard knew it later in his life: he was one of the original inductees into the Rock and Roll Hall of Fame, he’s in the Songwriters Hall of Fame, and the accolades go on. On the other hand, I wonder if rock and roll truly ever expressed its appreciation for his work.