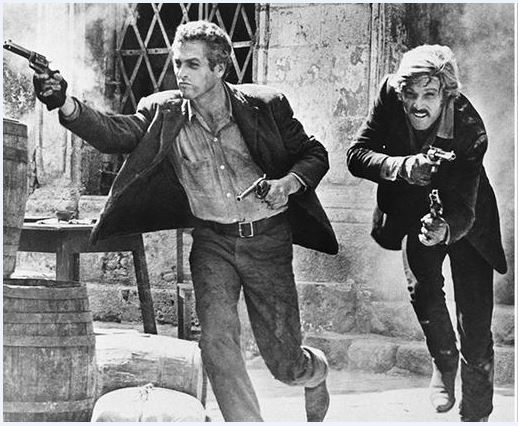 (Above: Think they’ll make it?)

Trouble in Beatle-land: it was on this date fifty years ago that John Lennon famously announced “I want a divorce” – and he wasn’t talking to Yoko at the time. That same day the last Merrie Melodies cartoon – Injun Trouble – is released by Warner Brothers, effectively ending both eras. I suspect you don’t get that title past the committee today.

Three days later, on the 23rd, Butch Cassidy and the Sundance Kid opens in limited theatrical release. The film will open to wider showings (and acclaim), and you’ll have a song in your head from the film in no time. That same day a new television show premieres: Marcus Welby, M.D., starring Robert Young. He’ll be recommending that you switch to Sanka in no time.

On the charts: Brace yourselves. There’s a new song at the top of the charts as “Sugar Sugar” by the Archies knocks the Rolling Stones off the throne. It will remain in the number one position for the next four weeks. Other songs making their debut this week:

“Love Of the Common People” – The Winstons (debut at #61). This is a decent record that just doesn’t move much on the pop charts, stalling out at #54. Its best showing stateside, interestingly, is in Council Bluffs, Iowa, where it makes it to #14.

“Jack and Jill” – Tommy Roe (#71). This one ends up one notch better than the Winstons record, stopping at #53. But it’s a much bigger local hit: Grand Rapids, who never saw a Tommy Roe record it didn’t like, advanced it to #5. That’s not as high as WSPT in Stevens Point, Wisconsin took it, though, as there it was a #1 record. To me, it’s “Dizzy, Part 2.”

“Son Of a Lovin’ Man” – The Buchanan Brothers (#81). This is an also-ran record that will see no higher than #61 nationally. Of course, the band will continue on as Cashman and West, as I covered here.

“You’ve Lost That Lovin’ Feelin’” – Dionne Warwick (#90). Here’s the “oh wow” for the week, and admittedly I’m not sure how to feel about it. I mean, it’s got that signature Warwick sound, which doesn’t seem right for this song – and yet it does. The fact that I gave it a second play immediately tells me that I must like it. A lot of people did: this will go on to be a #16 hit.

“Don’t Forget To Remember” – Bee Gees (#92). Forgot this one, didn’t you? That’s OK. It will climb just a little bit up to #73 and fall back down the charts. I’m looking at the cover of the Cucumber Castle LP and wondering why Robin’s missing.

“Jesus Is a Soul Man” – Lawrence Reynolds (#94). It’s going to be a few years yet before we get a whole lot more of Jesus (and a lot less rock and roll?) on the charts in the form of Jesus Christ Superstar, Godspell, Sister Janet Mead etc. But here’s an effort that snuck into the Top 40, landing at #28. KGB in San Diego had this at #2, while it hit #3 in Dallas and St. Louis and #4 in Houston and Cincinnati.

“Goodbye Columbus” – The Association (#95; back on chart). Yes, it’s back: originally this popped in back on March 15, but here we are again. Interestingly the film of the same title starring Richard Benjamin premiered on April 4, so I am honestly not sure why it’s back. Not that I’m complaining, of course. It’ll only make it to #88 this time around.

“Since I Met You Baby” – Sonny James (#97). It’s new life for an old Ivory Joe Hunter tune. This sounds a bit out of place for late 1969, which might explain it stalling out at #65. It does much better on the Country charts, though, and sells more than a few copies.

“Drummer Man” – Nancy Sinatra (#98). We should just call this a Hal Blaine record and be done with it, since it’s all him. This spends two weeks at #98 and then disappears. It’s significant in that it’s the last charted hit for Nancy.