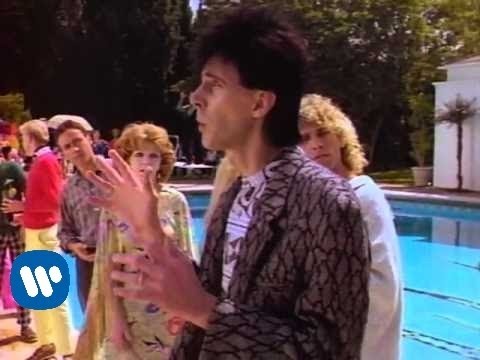 (Above: “How does he walk on the pool?” we asked, dumbfounded.)

The news of the death of Cars frontman Ric Ocasek came as a bit of a surprise yesterday. I was perhaps more surprised by the fact that he was 75. That would have made him about 34 when the band hit it big initially, and over 40 when the video for “Magic” was on TV every fifteen minutes as Heartbeat City sold in the millions.

You’ll find much better retrospectives on the band’s career elsewhere, and I decided I couldn’t really do anything better than what I had read already. (Besides, my records are STILL packed from the latest move.) Instead, I got to thinking about how many of the bands’ songs figured prominently in my high school and college years, and thought to reflect on those here.

At the movies: When you think of teenage comedy films of the early 80s, most people refer to Fast Times at Ridgemont High. Few include The Last American Virgin. I think of The Cars connected to both films. For FT@RH, it’s hard not to picture Phoebe Cates getting out of the pool without hearing the strains of “Moving in Stereo,” an album cut that sounds much, much better with headphones on. (It’s also likely to make you think of Judge Reinhold saying “Doesn’t anybody fucking knock?”) Last American Virgin is a less cheerful picture that I haven’t seen in years, but recall “Shake It Up” figuring prominently in that one.

On television: MTV and The Cars fit well together, as Heartbeat City gave us indelible visual images to go with the songs. Sure, Madonna rolling around on the stage stole the show at the Video Music Awards in 1984, but it was the Cars’ “You Might Think” that took home the top prize for Video of the Year. (That was the only award it got; Herbie Hancock won more that night, and that’s a subject for another time.) I already mentioned “Magic” above, but “Drive” also had a video that stands out in my memory. (I think I told the story elsewhere about the Safe Rides program at our high school, which provided designated drivers for drunk kids, and how we thought “Drive” should be their theme song.)

On college radio: The Cars weren’t done by 1987. Right before I started at WLRA they released “You Are the Girl,” which got plenty of play on my show and went to #17 nationally as well. We gave some airplay to “Strap Me In,” which didn’t fare nearly as well, and to “Coming Up You,” which was their last charted hit. We also had all of the bands’ albums in the racks, and weren’t beyond throwing in an album cut from Candy-O or Panorama as the mood hit us.

At our parties: If you grew up in the suburbs in 1985, you were likely issued a copy of The Cars Greatest Hits. It’s an outstanding collection that also included “Tonight She Comes,” a new track included in the collection that went on to indeed become a greatest hit. But everyone in the group of friends knew “My Best Friend’s Girl;” one of my friend groups had the habit of dating each other following breakups, which led to no small amount of awkwardness.

But the one that stands out in the memory is “Since You’re Gone.” In the summer of 1986 we finished high school and began to split down our separate paths, attending different colleges in different parts of the state. Each time it was time for someone to leave, there was another “goodbye” party held, usually with far too much beer. Once such party took place in the back porch of my parents’ house on the occasion of my friend Bill leaving for Southern Illinois University. He and his girlfriend Maribeth disappeared for a while at the party, as he was headed to school in the morning and wouldn’t see her for a while. (It’s not like today where kids at the state school where I teach seem to head home for the day on a regular basis. This was more of a “see you at Thanksgiving” existence.) When Bill came back to the party he was feeling particularly sad, and got up to have a few moments to himself. We, of course, speculated the worst: they broke up. “How could she DO that?” we asked, as “Since You’re Gone” played from the cassette player on the floor. Eventually Bill came back – just as we were gathering torches to storm the village – to let us know that no, they didn’t break up; he was just sad to be leaving home.

Try not to jump to conclusions: you can hear “Since You’re Gone” by clicking here.

One thought on “Rest in peace, Ric Ocasek: The Cars, “Since You’re Gone””