(Above: The Daily Mirror has doubts about this American show.)

Today’s the day that Star Trek makes its premiere in the UK. The show had been cancelled a few months before in the US, but the BBC starts to air it. It’s on BBC Two – in colour, complete with the extra “u.”

The following day there’s a real life space story: the Russians announce they have launched Luna 15 to get moon rocks and beat the Americans’ Apollo 11, which is set for liftoff next week. The plan fails, since you don’t see many Luna 15 commemorations taking place, do you?

On Monday the 14th the U.S. Treasury announces that all bills larger than $100 will go out of production. It’s why you’ve never seen a $500 bill, except in pictures; they used to circulate, and I’ve often wondered why they don’t come back (other than they’d surely be counterfeited.) Quick – who’s on the $500? Answer below.

And – much like today – Woodstock can’t get zoning. On July 15 the town of Wallkill, New York revokes a lease permit for the concert. Organizers move the event 40 miles away to Bethel, and we’ll talk about that next month.

On the charts: in a fast rise to the top, there’s a new #1: “In The Year 2525 (Exordium and Terminus)” by Zager and Evans, which only debuted June 21, takes over the top slot. It’ll stay there for six weeks. (Admittedly, it is not a favorite of mine, but your mileage may vary.)

“Hey Joe” – Wilson Pickett (debut at #81). Let’s get the first “oh wow” out of the way early, shall we? Sometimes, you don’t realize that something you’re used to could be better with a little something extra that you never thought of. And so it is with “Hey Joe” and a horn section. This is fantastic, and only made it to #59, which is criminal.

“Laughing” – The Guess Who (#83). This one you know. It’ll go on to be the second top-ten hit of the year for the band, squeaking in at #10. They’ll strike again later this year with a fantastic double-sided 45 as well.

“Where Do I Go/Be-In (Hare Krishna)” – The Happenings (#85). Y’know, I knew what I was in for when I clicked the link, and then yet again I wasn’t. It’s yet another set of tunes from Hair to hit the chart. If you were wondering “Hey, what would a hippie anthem sound like if it were crossed with “See You In September,” here you go. This will make it up to #66 before disappearing.

“Stay and Love Me All Summer” – Brian Hyland (#87). I’m just going to get this out of the way early: I like this. It would fit in nicely into a summer-themed mixtape. It’s peppy, happy, and just makes you feel pretty good despite the fact that the couple in the song isn’t doing so well. This only spends three weeks on the charts, and stalls at #82. His next release, 1970’s “Gypsy Woman,” will be a massive hit. It’s all about timing.

“Willie and Laura Mae Jones” – Dusty Springfield (#88). My goodness, why have we not been playing this more often? It’s another solid song from Dusty in Memphis, which is an album I’ve never owned and may well seek out as a result of this project. Like the last record, this only spends three weeks on the charts and manages #78. Maybe program directors thought it was too similar to “Son Of a Preacher Man?” Our loss.

“Wake Up” – The Chambers Brothers (#92). Another “oh wow.” I didn’t see the film The April Fools, which came up in almost every search I did for this record. If the rest of the soundtrack is this good, I may need to watch it. This is as high as this will go on the charts, spending one more week on the list and falling off.

“Lay Lady Lay” – Bob Dylan (#94). In high school I was all about Bob Dylan, which I’ve touched on in other pieces (like last summer’s missive on Blonde on Blonde). The memory that stands out about this record comes from my junior year: a classmate in whom I was interested, and may also have been interested in me, thought she’d listen to some Dylan to see what I had made the fuss about. This was the song she started with, and said “I don’t think I get it.” So much for that. This will make it all the way to #7, and it’s also Top 20 on the Adult Contemporary charts. It’s also still a terrific record.

“Birds of a Feather”- Joe South (#96). Sure, Paul Revere and the Raiders had the hit, but not until 1971 (and a moderate hit at that, hitting #23) and their version is pretty close to this one. This song is in its second life: the first release by South in 1968 “bubbled under” the Hot 100, and broke through in ’69 – sort of. This is the only week it appears on the charts. It also ends, at least on the LP, with a sort of reprise of “Games People Play,” which is still the superior record.

“In The Time Of Our Lives” – Iron Butterfly (#97). I said in the February 22 post about “Soul Experience” that I just don’t get into this band. I’ll stand by that for this one, and it was a lesser hit. This one will move one more notch to #96, and then come off the chart. I’m guessing that if you like one, you’ll like ’em all.

“Pass The Apple Eve” – B.J. Thomas (#98). It’s catchy, and sounds enough like “Hooked On a Feeling” to have been a huge hit. Here’s where I need some help from programmers of a certain age: did stations pass on this due to the Biblical connotation of encouraging sin? WYYY in Kalamazoo, Michigan charted this at #9; it also did well in Fort Lauderdale, FL and Columbus, OH, but not in many other places. It stalls on the national chart at #97.

“Abergavenny” – Shannon (#100). This will be in your head all day, and I apologize for it. Shannon is really British singer Marty Wilde, whose daughter Kim had far more (and bigger) hits than he did. (So, before you ask, no it’s not the same Shannon that charted in 1983 with “Let the Music Play,” which doesn’t get enough airplay on 80s stations for my taste.) This will just miss the Top 40, stalling at #47, but damn, it’s catchy.

Oh – I owe you an answer. The face on the $500 bill is President William McKinley. 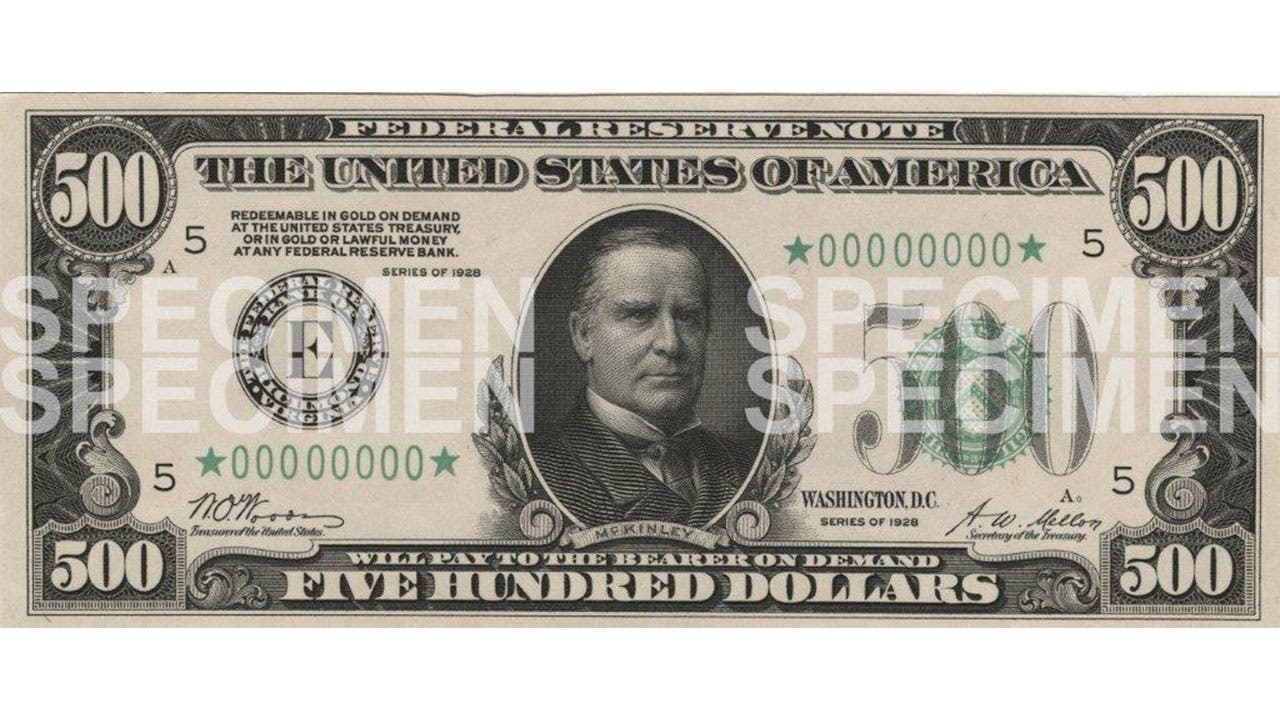