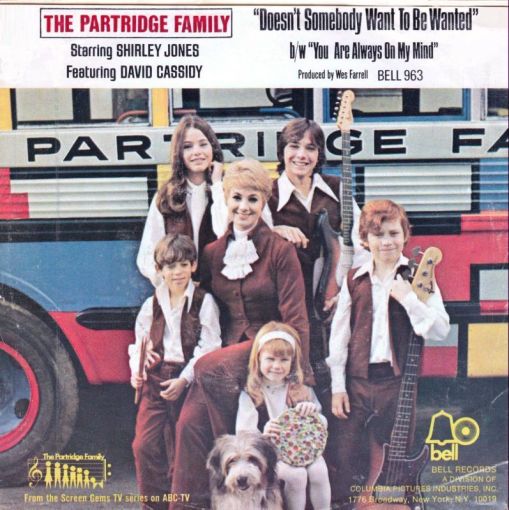 (Above: The 45 picture sleeve, which – depending on your preference – you saved either for David Cassidy or Susan Dey.)

The news of the passing of David Cassidy this week at the age of 67 wasn’t entirely a surprise. Earlier this year, he had shared that he was suffering from dementia, and earlier this week some news outlets had reported his move to intensive care with multiple organ failure as fatal before it turned out to be the case. It didn’t change the fact that for many, one of their “first crushes” had passed on, and the sort of finality that comes with that is rather sobering.

David Cassidy was born to be famous. His father, the late Jack Cassidy, was a hard-drinking actor who, I believe, holds the record for “most times portraying the killer on Columbo.” His stepmother (and TV mom) Shirley Jones needs no introduction, especially to fans of The Music Man, or Oklahoma!, or any number of other films.  David’s casting as the teen heartthrob lead singer of the fictional Partridge family in 1970 made perfect sense. (The Partridge Family, of course, was loosely based on a real singing family, the Cowsills, who had some pretty decent records of their own including “The Rain, The Park, and Other Things,” “Indian Lake,” and a huge hit version of “Hair” that just never seemed right coming from such a squeaky-clean family.)

In terms of a television show, The Partridge Family wasn’t a killer. It never fared higher than #16 in the year-end ratings (its second season, starting in Fall 1971, was the highest placement for the show). In terms of a musical act, The Partridge Family – and then later David Cassidy as a solo artists – were a huge success. Right out of the gate, the band’s debut single, “I Think I Love You,” went to #1.  You’re not being completely honest with yourself if you don’t either a) admit to knowing the chorus, or b) find the thing to be damned catchy. It spent three weeks at #1 in 1970 and netted the band a Grammy nomination for Best New Artist. (It did, after all, sell five million copies, which was more than the Beatles moved for “Let It Be.”)

The follow-up song, “Doesn’t Somebody Want to Be Wanted,” peaked at #6 in the US and made it to #1 in Canada. The string of hits continued with “I’ll Meet You Halfway” (#9), “I Woke Up In Love This Morning” (#13), and – one that should have been a bigger hit,  “Echo Valley 2-6809“. In fact, I was just about to make this entry about “Echo Valley” when I remembered another connection that the Partridge Family had to history: they were playing at the end of the world in 1971 in Fort Wayne.

On the morning of February 20, 1971, the wrong Emergency Broadcast System code words were sent across the AP wires to radio stations. Back in the day, you got the code words, authenticated them with the answer key (which usually hung by the wire in the newsroom), noted that it was a test, and went on with your show.  That particular morning, at 9:33 AM, the code word that moved – “hatefulness” – matched what was in the envelope. Listeners to WOWO in Fort Wayne who had tuned in that Saturday morning got to hear “Doesn’t Somebody Want To Be Wanted,” and then, essentially, were told that nuclear holocaust looked imminent. Fortunately, the audio is preserved for us to enjoy.  I’ve used this clip in radio class as an example of how to keep your cool during the worst possible set of circumstances. Aside from the “I’d like all members of the news team to come in to work, please,” announcer Bob Sievers held it together pretty well, letting out a laugh of relief when it was all resolved.  I suspect that when my number comes up, the last thing I’ll likely hear is The Partridge Family, too.

You can hear “Doesn’t Somebody Want To Be Wanted” by clicking here.

2 thoughts on “Rest in peace, David Cassidy: The Partridge Family, “Doesn’t Somebody Want to Be Wanted” (1971)”