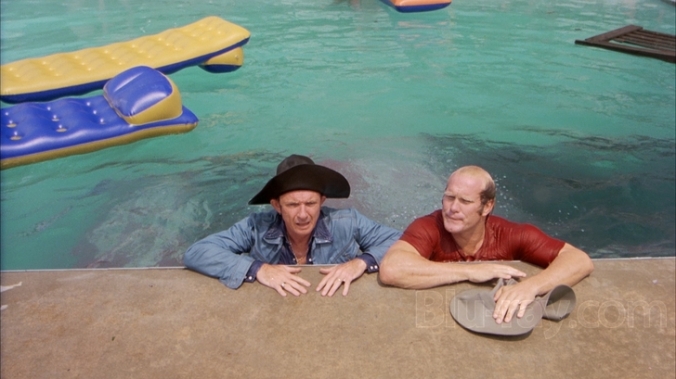 (Above: Mel Tillis and Terry Bradshaw hiding the car in the pool in The Cannonball Run.)

Word is also circulating today that country singer Mel Tillis passed away on Sunday, November 19, after a long illness at the age of 85.

Tillis’ recording history is astonishing.  In all he placed 26 albums in the Top 40 on the Country LPs charts from the 1960s through 2000. That’s not counting any of the greatest hits collections or albums on which he appeared with others. His country singles totals are equally impressive: starting with “The Violet and the Rose” in 1958, Tillis managed to dent the Country Top 40 singles chart fifty-seven times, including five Number Ones in the 1970s and one more (“Southern Rains”) in 1980. He was the CMA winner for Performer of the Year in 1976, inducted into the Nashville Song Writers Hall of Fame, and the Country Music Hall of Fame (finally) in 2007. The songwriter’s hall of fame?  Sure. In addition to writing most of those hit records of his own, he also holds writing credit on Brenda Lee’s “Emotions” and Bobby Bare’s “Detroit City“, which were massive Pop crossover hits in their own right.

One of the greatest tragedies, in my opinion, of modern Country’s focus on “hat bands” is that the work of many legendary singers is all but forgotten. Ask any suburban boot-scooting Country fan to name a Mel Tillis single, and see what you get for an answer.

Tillis went beyond just recording.  For a brief time he was a radio station owner, buying Amarillo, TX rock station KYTX (and flipping the call letters to KMML, a play on his stutter). That and WMML in Mobile, AL were eventually sold off.  Of course, Tillis also appeared on the big screen, often with Burt Reynolds and cars. He was in Smokey and the Bandit 2 and – a lousy film that I thoroughly enjoy and will defend for no particularly good reason, The Cannonball Run. (I can still hear in my head the line associated with the picture above: “The only thing hidin’ it in the pool did was make it purty.  It ain’t runnin’ worth a shit.”)

This blog tends to gravitate towards rock, though, and we can feature Tillis here as well.  He wrote the song “Ruby, Don’t Take Your Love To Town,” a song recorded by Johnny Darrell (and became a top 10 Country single) which went on to be a Top 10 single in the US (hitting #6) and #1 in the UK for the First Edition.  It’s also important because the First Edition – which had previously been psychedelic with “Just Dropped In (To See What Condition My Condition Was In)” – later went in a more Country direction at the urging of lead singer Kenny Rogers.  Rogers eventually left the band (he knew when to fold ’em) and launched his own legendary solo career.

Many Oldies stations had left this one off of their lists.  I always added it to mine.  It’s not by any means a fun song, but it’s a pop masterpiece in its execution.  By the end of the record, you can hear the desperation in Rogers’ voice as the narrator’s girlfriend heads out on the town against his wishes, leaving the paralyzed Vietnam veteran behind at home. It’s still a powerful record and a tremendous piece of writing that Tillis isn’t usually associated with, and should be.

For God’s sakes, turn around.  You can hear young Kenny and the First Edition sing “Ruby” by clicking here.