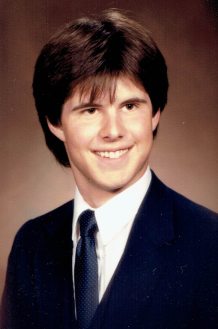 The past week has been Homecoming Week at my high school.  I was at Victor J. Andrew High School in Tinley Park for four years. I haven’t been back to it in twenty, or five times as long as I was there. It’s not because I hated my high school days: far from it. But I didn’t have what you would call a “standard” high school experience because I didn’t necessarily fit in anywhere.  I was a part of my own clique, in a sense.

That left me to just be “a guy in school,” who hung out with others who were largely the same, and we tried to get dates to Homecoming with girls who weren’t interested in either of the above groups. Homecoming dates back then were serious business: you went with someone you might want to date, since the event would be far more expensive than just going to a movie.  You had to buy flowers that you had no idea how to pin onto your date’s dress (if you were smart, which you weren’t, you bought a wrist corsage).  The guys would put on ill-fitting suits with ties their dads tied for them, and the girls would get poofy dresses they’d never wear to anything else ever again.  You’d stand around at the dance, doing that awkward slow dance thing where you have hands around the waist, shuffling back and forth, making inane conversation about how you hate your English class, and then leave to go have a late dinner at a “grown-up” restaurant (i.e. not Shakey’s Pizza). It was a practice run to see if you wanted to go to the prom, which was a practice run to see if you wanted to get married.

At least that’s how I remember it, and that’s the problem with memory: it’s subject to change. Every so often, reality smacks you across the face and you see that what you remember – the way you are sure things were – is not really the way that they were, and that is never a good shock to the system. The very idea of Homecoming, after all,  is to get grads to come back and remember all the good times that they had when they were in school and see all the people they haven’t seen in years.

But I don’t think that that is possible anymore, and here’s why: you can never really go home again, since home is wherever you are in the present.  When pressed with the question “where are you from originally?” I always say “Chicago,” which is the standard cop-out answer for kids who grew up in the suburbs.  If pressed further, I usually say “Tinley Park,” since that’s where I went to grade school and high school, and I can’t for the life of me come up with a positive memory of junior high school in Orland Park.  I’ve now, however, lived in Grand Rapids, Michigan for almost eleven years now, and it feels more like home than any of the South Suburbs do when I drive through them.  They’ve changed too much. Hell, even my high school, from the pictures I’ve seen, looks nothing like it did when I went there.  I was, for a long time, in the habit of driving through my old neighborhood, past my old house, past my friends’ houses, to remind myself of good times and carefree summers spent there.  I can’t recall the last time that I did so, since each subsequent time I made that drive the neighborhood looked less and less like I preferred to think of it. Many of the places we hung out are gone, replaced with faceless and soulless chain stores or cell phone shops.  There’s a picture in my head of the way it looked, and the people that are there are a certain way, and neither vision is valid.  Facebook has done an amazing job of allowing the people you grew up with to expose bits and pieces of their personalities and beliefs to you (especially in the last few years) that cause you to sit back and think “Did I really know these people?  Have they changed, or have I?” I came to realize that many of my high school classmates were just people randomly assigned to the same school I was based on our where our parents decided to live, and that that is all we ever truly had in common.  (I went to my 10 and 20 year reunions, Facebook was invented, and I decided to skip the 30. It was not an accident.)

Maybe Bruce Springsteen put it best in “For You“: “And the band, they played the homecoming theme while I caressed your cheek/That ragged, jagged melody – she still clings to me like a leech.”  It’s that memory that tugs at you and wants you to remember it, but there’s probably been a fantastic reason to try and forget it in the last few decades.

Homecoming dances always have a theme song. Our junior year theme was Lionel Richie’s “The Only One.”  I had to look that up, because you could have given me a thousand guesses and I wouldn’t have come up with it. (I similarly cannot remember the 1985 theme, and I don’t have a yearbook to reference it.) They are usually slow songs along the lines of “Endless Love” or “Together Forever” (hell, a Rick-rolled Homecoming would be pretty cool.) I don’t believe a school has ever picked U2’s “A Sort of Homecoming,” since it’s difficult to do the slow dance shuffle to its melody.  But there are lines in the song – “And  you hunger for the time,” “The city walls have all come down” – that address the notion of change that is far more likely than the “we’ll be together forever” theme that couples who won’t still be dating four months after the dance snuggled to. For as sure as I no longer look like the photo at the top of the page, home no longer looks the way it did, either.

You know it’s time to go.  You can hear U2’s “A Sort of Homecoming” by clicking here.