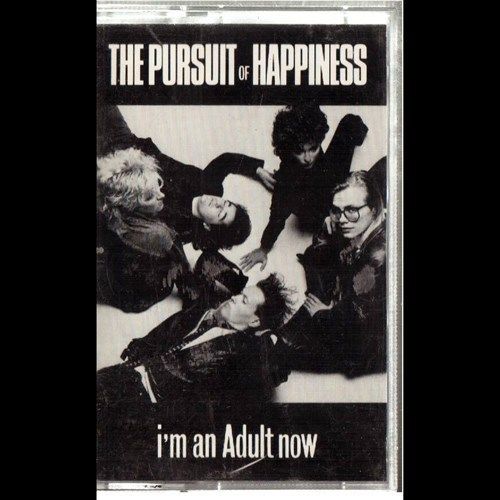 The fall of 1988 can best be described – in my life, anyway – as “the awkward transition.” On the one hand I was a typical college kid, dealing with classes, girls, and getting into trouble after class by sneaking in to the campus bar (which required little or no sneaking). On the other hand, I was an atypical college kid: I commuted to school, held down morning show duties on the campus radio station each day and, by the end of fall, weekend duties on a “real” radio station. I did more work-work than school-work. I felt very much like an adult and wanted to be treated as such, whether or not I was ready for it.

Enter this record at just the right time.  Toronto, Canada’s The Pursuit of Happiness put out their first EP in 1986.  The four-song collection featured this early version of “I’m An Adult Now,” which garnered considerable attention in Canada. (We get our CanCon credit for this one, after all.)  The band caught the attention of Todd Rundgren, who got the band back in the studio to re-do the track (with the Todd Touch, of course), and released it with other selections on the LP Love Junk in the fall of 1988. That’s the version we’d have gotten at WLRA.  To my ear, it sounds a little angrier than the first version, and I don’t think that that is unintentional. The early recording, to me, doesn’t convey the same angst about becoming a boring old person (you know, in your thirties) as the remix does.  I mean, this song contains these lyrics:

Now picture yourself, wanting to be an adult so badly, having just gone through one of several consecutive breakups, and thinking “I feel you, man.”  That’s why the song became a staple not only of my show but on the shows of a lot of guys at the station.

Fast forward to actually being an adult now.  I often hear my own students talking about the struggles of “adulting” (I like to tell them that the first part of becoming an adult is not calling it adulting, and I get eye rolls). To them, it’s things like looking for work, finding a mechanic, dealing with student loans, etc.  To us – if this song is to be used as our cultural artifact – it was drinking, dating, complaining about back pain, and noticing that the music got a little loud for our taste. I think we had it easier.

See for yourself if you’ve grown up.  You can hear the Rundgren-influenced version of “I’m An Adult Now,” the one that I’d be cueing up most mornings by 9am, by clicking here.

One thought on “College radio classics: The Pursuit of Happiness, “I’m An Adult Now” (1988)”