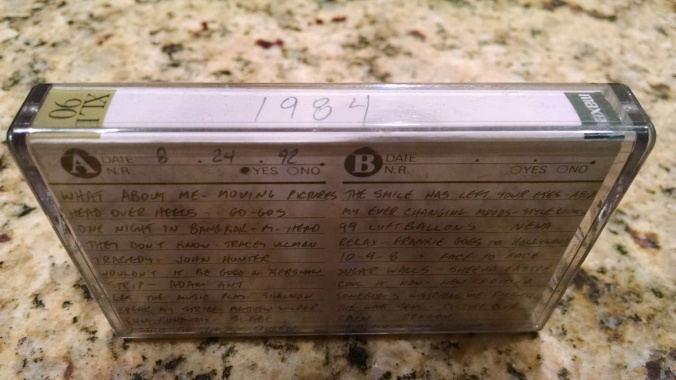 A couple of weeks ago I spent a Saturday night going through boxes of 45s from the 1980s (read about that here and here) to see what sort of musical surprises lay within.  On more than one occasion that evening I remarked about a mixtape of songs from in and around 1984 that I used to listen to in the car. On this particular Saturday night I was fortunate enough to find the box that contained the tape.  Let’s see what’s on it.

First observation: the tape is dated 8/24/92. This is a retrospective done well after the fact. Considering that by this point I was closing in on almost five years in radio, I suspect there are songs here that I would have no way of knowing about as a high school sophomore but rather discovered later. Musical revisionist history.

Second observation: this tape’s been through a lot.  Is this… candle wax on it?

Third observation: no, not all the songs are technically from 1984. This was common for mixtapes that I made. I’ve always been a little bit out of touch, chronologically, and while the songs are close, they don’t match up exactly. The later acquisition of several Joel Whitburn books made my research a lot more exact.

Anyway, what have we?

Moving Pictures, “What About Me?” – One of the last of the 45s I pulled out of a box a few weeks ago is the first song on this tape. Fun fact: it charted again in 1989, so I could put it on two tapes, I suppose.

Go-Gos, “Head Over Heels“ – Guilty pleasure alert.  I always liked this song, even if I made fun of Belinda Carlisle’s dancing in it when I took a turn as a VJ in college. (That got its own post here.) I’d put up with bad dancing in the video in exchange for Charlotte Caffey’s smile.

Murray Head, “One Night In Bangkok“ – This is another great song. I cannot hear it and not sing along. I get my kicks above the waistline, sunshine…

Tracey Ullman, “They Don’t Know“ – Yet another song that I’ll freely admit to liking. The intro to this record is fun to talk up.

John Hunter, “Tragedy“ – Another of the singles from the box.

Nik Kershaw, “Wouldn’t It Be Good“ – I remember a lot of Nik Kershaw being played at WLRA, most specifically “The Riddle.” The inclusion of this song in “Pretty in Pink” ensured its inclusion in every 80s-throwback weekend on the radio for years to come.

Adam Ant, “Strip“ – I bought this single in high school when this came out.  This should have been a bigger hit, because it’s damned catchy.

Shannon, “Let The Music Play“ – Some songs have aged better than others, and I’m thinking this one hasn’t aged well.  Your mileage may vary. I wasn’t one for dance clubs, and I am sure in certain circles this song still tests very well.

Matthew Wilder, “Break My Stride“ – This is another one that gets a lot of inclusion in 80s weekends.  It might be more popular now than I remember it being then.

Slade, “Run Runaway“– NOW we’re talking. A cool video with a medieval feel, and whatever the hell Noddy Holder was doing with his tongue in it.

Queen, “Radio Gaga“ – This should have been the lead track on Side 2.  It serves as a much better starter track.  It also reflects the revision I mentioned: I recall watching the video when the song was out, but wouldn’t have given it a second thought.  A life in radio changed that.

John Lennon, “Nobody Told Me“ – also written about from the box of 45s. I still love this record, and it does serve as a good closer for the first side.

Asia, “The Smile Has Left Your Eyes.”  That one just got covered earlier this week. I can see why this starts side 2, as it’s tough to segue out of anything into this.

Style Council, “My Ever Changing Moods“ – Another song that I have always liked a lot.  I remember a night out for beers at WCFL where we talked about eventually adding the 80s to the playlist.  I suggested that this would be a song I’d add, and I think that may have broken up the party.

Nena, “99 Luftballons“– In German, of course. This is the song that taught me that the German word for “Captain Kirk” is “Captain Kirk.”

Frankie Goes To Hollywood, “Relax“ – Fortunately, I resisted the temptation to get one of those T-shirts that said “Frankie Say…” on it.

Face To Face, “10-9-8“ – This should have been a bigger hit.  At the very least, it should get a little attention on these 80s weekends that I mentioned. Less Matthew Wilder, more this.

Sheena Easton, “Sugar Walls“ – A song written by Prince under the name Alexander Nevermind.  It’s also vaguely (?) dirty, which is probably why we liked it at the time.

New Edition, “Cool It Now“ – Again, age hasn’t been as kind to this one, but it’s fun to sing along with.  Ronnie, Bobby, Ricky and Mike…

Rockwell, “Somebody’s Watching Me“ – Yes, that’s Michael Jackson singing backup.  When you are the grandson of Berry Gordy, Jr., you get certain perks – like your record being made in the first place. I suspect Michael is what sold this one. Then again, there’s a 1984-meta-quality to it, isn’t there?

Culture Club, “The War Song“ – For all the Boy George that gets played, you almost never, ever hear this one, and that’s too bad.

Dragon, “Rain“ – Now here is the hidden gem of this tape.  It’s ironic that it’s here, too – this tape was done two years before heading for New Zealand. Once I got there, I put it in rotation at the station (we had a category for Aust/NZ music), and gave it a lot of airplay. The single version is on the tape, but since then I’ve acquired a 12″ remix, and that’s in the link.

Jump ‘N the Saddle Band, “The Curly Shuffle“ – Here we have the Worst Segue On The Tape. This was a novelty song that got a lot of airplay on Robert Murphy’s show on Q-101 in Chicago (their hometown) – so much so that they did a custom version for his show. I think this song is as polarizing as its subject.  People either love it or hate it.  Me?  Let’s just say I like it more than I like the Stooges (Moe, not Iggy).

In the context of 1992, when it was made, it would have been useful to have this in the car for long trips. The summer of 1992 saw me taking a lot of them, and by late fall I had switched jobs from WLLI to WCFL in Morris, which substantially lengthened my commute. Many of these songs had disappeared from the airwaves by then.  Now? As I indicated on a few, some are burnt by nostalgia channels.  Maybe I was just ahead of the curve a bit.

Question for you: if you were making a 1984 mixtape, what would you include?