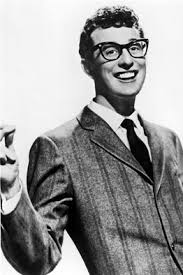 The tragic story of Charles Hardin Holley has always fascinated and saddened me.  What would rock and roll have been had Buddy Holly not perished in the famous plane crash on the early morning of February 3, 1959 in Clear Lake, Iowa? Would a British band inspired by his music so much that they also named themselves after insects gone on to the fame that they did? And what sort of music would Holly have gone on to create?  (Given the direction his music was taking in early 1959 with the lush orchestration of “True Love Ways,” I tend to think that we were just beginning to see what he could do.)

This post won’t be about “the day the music died,” though.  Much has been written about that by people far more in the know than I.  The Behind the Music done on VH1 several years ago did a nice job of it.  You could also look up my friend Bob Hale, the disc jockey who hosted the concert at the Surf Ballroom on February 2.  Yes, he’s the one who flipped the coin to see who got on the plane. (Bob’s at the 24 minute mark of the video.)

Instead, this is about record collecting, and one of the “holy grail” pieces I expected to spend a lifetime looking for. While I’ve written about starting to be fascinated by records at the age of 4, I really didn’t start building my collection until I got to high school.  There’s not much you can do without any source of income other than hope for more hand-me-downs.  My parents parted with their records to get me started, first with 45s, and then their LPs.  One of the LPs in that collection was Buddy Holly’s Greatest Hits on Coral records – the yellow cover from the 1960s.  I discovered Buddy’s music and wanted to find more of it, only to find that original records weren’t exactly plentiful.  While Holly was unquestionably a star, the combination of a short career and the circumstances of his death made finding his records a challenge. I managed to find a single of “Peggy Sue” on Coral, but soon realized it too was a reissue.

Then, one day, I was in the right place at the right time.  As I mentioned earlier I had figured out how to get to the cool used record shops in Chicago from the music-free zone of the South Suburbs.  (It wasn’t entirely music-free: we had record stores out there, but they were either in the malls or stand-alone stores like The Music Joynt that sold as much smoking equipment as vinyl.) For a kid without a driver’s license, this was no small feat.  I had to catch the Rock Island commuter rail into the city, find a #22 CTA bus, and head north to Lincoln Park where the good stores were.  I was partial to Second Hand Tunes, a shop at Clark and Deming where I had had good fortune searching for 45s.

On an afternoon in the summer of 1984, the date lost to time, I wandered into Second Hand Tunes.  The layout was simple – 45s in the back, new releases near the counter, and on the wall behind the register hung the rare and unusual finds the store had taken in in trade. Almost every record store I’d been in looks like this. What caught my eye, though, was an album that I had only read about but never seen in person.  Hanging above the register was a copy of the Buddy Holly LP “That’ll Be The Day.”  The record price guides I had flipped through by that time listed it as “hard to find,” including a black and white snapshot of the cover.  I recognized the cover immediately, but seeing it in color was remarkable.

The sight of Holly in the suit superimposed over the colorful sunset was remarkable.  I mustered up the courage to ask the guy behind the counter if I could see the record.  The clerk smiled and handed the fifteen-year-old aficionado the LP.  “This is a rare one,” he said.  I carefully palmed the record and went to slide the record from the jacket.  If I remembered my guide correctly, there were two versions of the LP: one on a plain black label, and the other on a label with rainbow colors.  The plain black variation was the rarer one.  Or was it?  I couldn’t remember.  Anyway, removing the vinyl revealed something unexpected:

The label was pink.  This was a promo copy, the type sent to radio stations in an attempt to get them to play the record on the air. I swallowed, and asked “H-how much are you asking for it?”

“You’re not going to find many of those,” the clerk said.  “I’d need fifty bucks for it.”

$50 was about all I had to spend that day.  I had planned to grab a nice stack of 45s, get lunch, and be able to get back to the suburbs by late afternoon.  But, I decided that I’d only be buying one record that day, and lunch would have to be a candy bar on the train, heading home early.

I bought the LP, sat with it on the train hoping not to drop it, got it home, and carefully played it.  It sounded as though it hadn’t been listened to in the almost 27 years since its release. There were no scratches, and only a few clicks and pops.  I imagined a radio station getting the record in, listening to it, saying “Nope,” and tossing it in the closet. This was a very different mix of the song – an almost acoustic rendition.  “That’ll Be The Day” was slower and stripped down.  This was not the version that would get the Crickets on television, and I could see a programmer passing on adding the tune.

Of course, I still have the LP.  It’s sobering to realize that I have owned it for almost 33 years, and Buddy Holly only lived for 22. It’s not one that I play very often, as I don’t want to risk scratching it.  It’s also in what I call “the fire box”: I’ve told my wife that if we are ever awakened by the sound of a smoke detector, I have to make an attempt to get the box out of the house. There are some Elvis 78s and other rarities in the box, and this record certainly has its place among them. I have seen various estimates of what it might be worth, and suffice to say it’s more than fifty bucks. More valuable to me, though, is the story of a young man discovering great music and developing a lifelong passion for it.  I wouldn’t trade that for any stack of 45s.

I took the record out of the box this morning.  To give the original “That’ll Be the Day” a listen, click here.