(Above: The psychedelic world of Ron Britain, WCFL.)

In the last post I lamented the inability to travel through time to hear the WERX countdown.  Today, at least, time travel IS possible, because we have this bit of radio wonderfulness to enjoy.

50 years ago this weekend, Chicago was cleaning up from the Blizzard of ’67. That didn’t stop Ron Britain from doing his show at WCFL/Chicago. Ron’s radio show was something to be experienced. When I interviewed Ron for my dissertation this spring, we talked about how the show wasn’t just records. “The songs were curtain closers for my bits,” he explained – and it’s the truth.  There is so much going on during a typical Britain show from the period that it puts modern voicetracked radio to shame.

In a typical night, Britain would typically do two pre-produced comedy bits an hour. He had the help of the WCFL production staff, led by the legendary Dick Orkin.  This bit from the same period is one of my favorites, in which Britain’s alter ego Rex King explains the world of the hippie.  We don’t have the bits on this aircheck, but this isn’t a typical night – it’s a Saturday.  The very show that most jocks today throw away as a freebie still has that high level of production value that WCFL was known for.  And even if the Britain show production isn’t enough for you – the most amazing jingles in Top 40 history dress the show tremendously.

Even a live read by Britain was an experience. Studio engineer Al Urbanski would hit Ron with a variety of pre-recorded sound effects, and Britain would play along.  You hear a bit of that on this show in the ad for Magikist rug cleaning.

Let’s travel through time and go to the tape:

:00 – The show opens with the end of Michael O’Neill’s newscast and the pre-produced show open that all jocks used.  Of course, there’s a twist.

:50 – A bit of “Georgie Girl” by the Seekers, followed by a trippy WCFL Twin Spin jingle.

I had to edit the tape here, so we rejoin the show much later.

1:30 – Britain’s coming out of “Lay Down Your Arms” by Grady Lloyd to a hail of gunfire.  Picture him crawling him around the studio to the sounds of explosions.

2:48 – The WCFL Review jingle plays, as the gunfire continues, into the bottom of the hour news.

3:06 – The 8:30 news, led by updates on the snow cleanup. It’s a short look at headlines, followed by a Mutual network update that leads with the story of the loss of three American astronauts the day before in the Apollo 1 tragedy.

4:10 – The full newscast is missing, but we have the sports updates to close the report.  College basketball scores and hockey scores in progress. (Apparently, despite the blizzard, there’s college basketball at Chicago Stadium tonight.)

8:00 – Twin Spin jingle into “Happy Together” by the Turtles.

10:57 – A groovy nighttime jingle.  The guy hitting the low notes is on point.

12:00 – A commercial for the Chicago Sun-Times.  I don’t know if this was done in-house or by agency, but this is amazing.  It’s a spot aimed at younger readers to get them to read the newspaper.  It also uses sound effects – gunfire, nature, and music that sounds suspiciously to me like the middle of “My World Fell Down” by Sagittarius – and this is an approach that should be revisited.

15:40 – Britain does a live read for Magikist Carpets.  Radio is simply not done this way anymore, and it’s a damn shame. I actually wanted to get my rugs cleaned after hearing this, and may have hollered out the window to do so.

21:38 – Jingle, into a live announcement that Jewel Food Stores will be open until 9, and that “they have fresh bread, milk and meat available.”  The blizzard depleted supplies of same, and generations of Chicagoans have since made sure to buy bread and milk before a storm hits, whether they need them or not.  I still do this, and I wasn’t even alive during the blizzard. 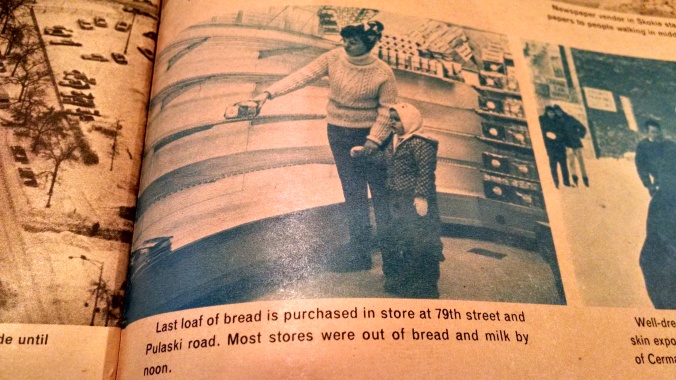 24:47 – The WCFL Capsule Countdown. This is a collection of the hooks from all the songs in the top 10 on the Sound 10 Survey.  (We tried to replicate this feature on our countdown feature on WRLL/Chicago in the 2000s, with me doing the “In quick review for you…” part.)

28:40 – Britain signs off the program, the pre-produced show close airs, legal ID, and into the news.

I don’t have a large collection of airchecks outside of copies of my own shows, which fill a number of boxes in my basement.  This tape of Britain from ’67, though, has always been among my favorites.  At various times in my radio career, when I felt that everything was getting stale, formatted, and predictable, I would put this on.  It served to remind me that radio used to be, and should be fun.  It also reminded me that each day, someone was hearing me for the first time.  What would they notice about my show? Would I stand out or fade into the background?  Someone else tuned in today because they were having a rough go of it in their life.  What could I do to make their day just a little better?  And how could I convey that I had one of the best jobs on the planet – I got to play rock and roll music and get a paycheck for it?

Most radio pros can quickly name their radio influences.  A lot of them add Ron Britain to that list, and now you know why.

You can travel through time and experience the full show here: