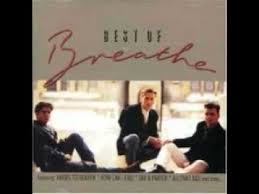 (Above: Quite possibly, the world’s shortest album.)

There are usually a few signs that summer – and with it, summer vacation – is coming to a close. The main ones that I noticed each year were the intensity of annual cicadas each August and the first broadcast of exhibition football on television.  Hearing both of those sounds was a sure indicator that the carefree summer life was drawing to a close, and it was time for the school cycle to begin again in earnest.

For a time in the 80s, there was a third – the “farewell” song on the radio. As millions packed their things to go back to college, couples – some dating back as far as Memorial Day weekend – prepared to see if they would survive the distance created by the return to school. In the summer of 1988 that void was filled by one of the sappiest of the genre, Breathe’s “Hands to Heaven.” I can only imagine how many couples chose it as “their song” largely because it was a slow song. But the pop charts in August of 1988 had plenty of slow songs to pick from. Chicago’s “I Don’t Want to Live Without Your Love” was also riding high on the charts at that time, and could also fit the bill as a “farewell” song. Richard Marx’ “Hold On To the Nights,” Eric Carmen’s “Make Me Lose Control,” and Terence Trent D’Arby’s “Sign Your Name” all round out a down-tempo Top Ten.

But of all the slowness and sap, “Hands” is the one that sticks out. There was no escaping it on the radio or MTV. Just like Glass Tiger’s “Don’t Forget Me (When I’m Gone) in the summer of 1986, pop music kept that pang of leaving close at hand.

That summer turned out to be my last “summer off” in life. I made the transition from college radio to professional radio to work over that following academic year. The cycle of school years ceases when you are no longer connected to a school, and by 1989 I was finally getting to “pack my bags and say goodbye.” Maybe that’s why the song sticks out.  I didn’t have a relationship to end that summer – I had my teenage years end instead, and there’s no getting back together with those.

In my best wedding DJ voice, “Now we’re gonna slow things down just a little bit…”  You can slow dance to Breathe here.