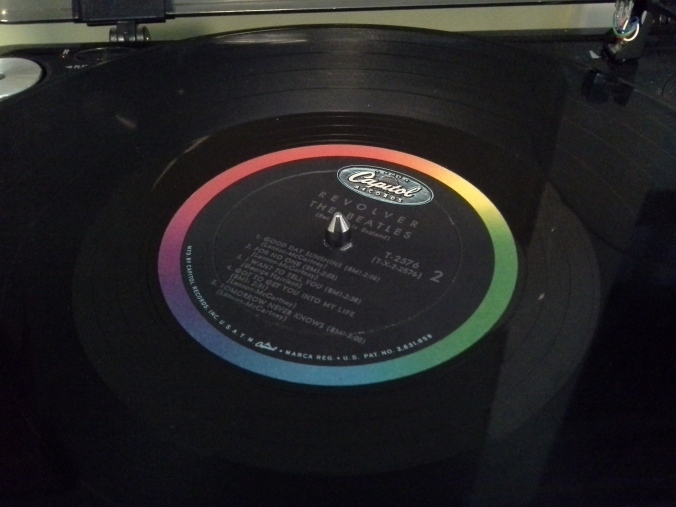 Friday marks the 50th anniversary of the release of the Beatles LP Revolver in the UK (the American version was released three days later). For my money 1966 may have been the greatest year in pop music. Three of the albums in my all-time Top 5 – this one, Dylan’s Blonde on Blonde, and the Beach Boys’ Pet Sounds – all came out within a three-month window that year.  (Now I’m kicking myself for not having my dissertation done earlier so that I could do retrospectives on the other two albums. I may have to loop back.)

My fascination with the Beatles’ music began early. I progressed from my first record player at age 4 to my first record changer at age 9.  By that point I started to slowly move my parents’ abandoned LPs into my room in our house in Tinley Park.  They both graduated from high school in 1964, so the middle of the 1960s was represented in the stash. I first gravitated to Meet The Beatles, and later to Sgt. Pepper and Magical Mystery Tour, which I did not fully appreciate until later.

But many of the albums were missing. I studied the original Capitol liner sleeves (the ones with pictures of “other albums you may enjoy”) and set out to fill the gaps.  Shortly after my birthday in 1979 I took $20 that I had accumulated from allowance money, odd jobs, etc. and ventured to the Record Bar at Orland Square Mall, which had just opened. (Fun fact: When I turned 16, the Record Bar was the first place I applied for a job. I was interviewed but not selected.  I ended up working for a gas station, and then the late Kroch’s & Brentano’s bookstore. I never got that record store job.)

For $20 I was able to obtain three of the orange-labeled Capitol reissues: The Beatles’ Second Album, Meet the Beatles, and Revolver. I knew most of the hits from the first two albums from the Beatles cartoon show, which aired after school on channel 44. Then, I dropped the needle on the copy of Revolver.

I didn’t understand it.

The album not only felt different, it looked different.  From the groovy Klaus Voorman cover, to the back cover photo showing the group with longer hair, this one was different than the Fab Four pop I had been enjoying. I recognized “Yellow Submarine” and “Eleanor Rigby,” and that was it.  I left the album back on the shelf and chalked up the $6 to a bad choice.

But Revolver wasn’t for a ten-year-old. There’s a complexity to it that requires some life experience to appreciate. At ten, girls were still yucky for the most part. The nuance of an ended relationship as expressed in “For No One” cannot make sense until much later, when you find “that she no longer needs you.”  At ten, you’re not yet paying taxes, so the complexities of the British economy represented in “Taxman” are boring. And at ten you’re (hopefully) so far removed from the psychedelic scene that “She Said She Said” and “Tomorrow Never Knows” just sound like noise rather than innovation in recording. (Don Draper didn’t like “Tomorrow” at first, either.)

As a college disk jockey I went back to the album and had that sort of “holy shit!” moment that hits you when you realize that someone has created something that you wish you had a fraction of the talent necessary to spawn. If you haven’t listened to this album in a while, or never have, give it a whirl and see what I mean.  Happy birthday, Revolver.