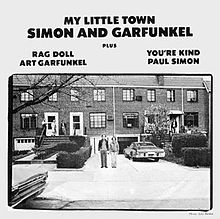 So what was the song playing when I thought “I should share these thoughts?”

Oddly enough, it was “My Little Town” by Simon and Garfunkel. The song made it to #9 on the national charts in late 1975.  (Word of warning – expect a lot of chart stuff on this blog. The dissertation that I wrote is heavy in chart analysis.) It turned out to be the swan song for the duo, who had far more memorable hits.  Considering that this actually charted higher than “Scarborough Fair (Canticle),” which you know more words to, charts are a funny thing.

What struck me hearing the song for the first time in a while was remembering hearing it when it came out.  I was six years old and would have been riding in my dad’s 1968 Ford, sans car seat, probably listening to WCFL.  (I didn’t get to pick the station at that age, so my memory could be off.) Even by the age of six I realized I had an ability to form clear mental pictures that stuck with me for a long time.  Forty plus years later, hearing Paul and Art sing about a rainbow, ” and all of its colors are black,” I still get the picture of a monochrome rainbow.  Shades of gray in mine, but you get the idea.

Six-year-old Len didn’t understand the pictures of the hometown that’s no longer viable, closed factories and dirty breezes and all.  It takes an older mind, soaked in cynicism, to appreciate the imagery.  For a young kid, though, rainbows worked.

You can hear the song by clicking here .