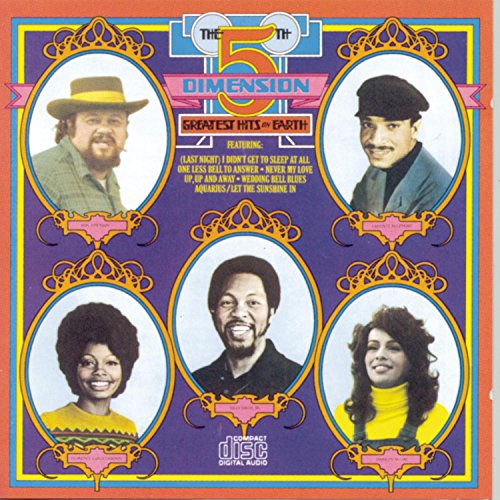 (Above: a 5th Dimension LP that got an awful lot of play in my house growing up.)

It’s the date of the March for Victory – a pro-war demonstration in Washington that attracted about 50,000 people unhappy with President Nixon’s decision to reduce the American forces in North Vietnam. That same day, pro bowler Don Johnson hits eleven strikes in a row, and then leaves the ten pin, finishing with a 299 game and not claiming the $10,000 bonus and new car that a perfect tournament game would have brought him.

The next day 27 people will be treated at a hospital in Los Angeles after ingesting potato chips that were laced with LSD and served at a party at the South Bay Club in Playa Del Rey. Eight of them will spend the night in the hospital, and eventually the person responsible will spend six years in the pen.

Monday the 6th marks the 50th anniversary of the launch of the news program(me) PM on BBC Radio 4. That same Dr. Sam Sheppard will pass away from complications related to alcohol consumption at the age of 46. If that name sounds familiar, it should: he spent time in prison for the murder of his wife – a conviction he maintained was wrongful all the way to the U.S. Supreme Court. After the conviction was reversed amid media frenzy he made a guest appearance on The Tonight Show. He later tried his hand in professional wrestling in 1969 as “Killer” Sam Sheppard.

On the charts: it’s the sixth and final week at #1 for “Bridge Over Troubled Water” by Simon and Garfunkel. Next week we’ll see what replaces it after a month and a half.

There’s a slew of new records on the list this week as well.

“The Girls’ Song” – 5th Dimension (debut at #69). I vote that we go “oh wow” right out of the gate. This only makes it to #43, and it’s a piece of pure pop pleasure. Jimmy Webb wrote this, which might explain why it goes down so smoothly. KIKX in Tucson, Arizona has this as a #3 hit.

“Deeper (In Love With You)” – The O’Jays (#71). Here’s another one that you likely haven’t heard in years but may be reaching for the volume control now that you have. This will move just a few notches and peak at #64.

“Everything is Beautiful” – Ray Stevens (#74). After a decade of releasing primarily novelty tunes Stevens got serious. “Sunday Mornin’ Coming Down,” which charted on 10/25/69 started that trend, and here’s where it hits its apex. This song goes on to spend two weeks at #1 and claim the Grammy for Best Pop Male Vocal that year. It’s back to comedy by the end of the year, though, and I won’t spoil that one yet.

“Come Running” – Van Morrison (#78). If you’re one of the many that keeps Van’s Moondance LP in rotation, then no introduction is needed here. As a single, this slides into the Top 40 at #39 – it’s his first since 1967’s “Brown Eyed Girl,” which I assume I also don’t need to introduce to you.

“Chicken Strut” – The Meters (#82). My first thought upon dropping the virtual needle here was “I want that intro for a ringtone.” My second thought was “man, what a fun list this is turning out to be.” This spends two months on the charts and peaks at #50, but KGFJ in Los Angeles places it as #5. I now have to decide whether this outranks “Psycho Chicken” by The Fools and “In the Mood” by Henhouse Five Plus Two (also Ray Stevens!) on my personal list of songs with chicken noises on them.

“Can You Feel It” – Bobby Goldsboro (#84). This one’s more of a miss than a hit for Goldsboro, stopping at #75. His big bounceback will come later this year, and there’ll be no avoiding it.

“Love Minus Zero/No Limit” – Turley Richards (#86). I’m not sure how I had missed this one, as a) a huge Dylan fan who b) always loved this song. This one gets to #84, which actually makes it the highest-charting version of the song. (Dylan never released it as a single, and neither Rick Nelson’s version or Joan Baez’s version charted. Oh, and the Eddie Hodges version from 1965 is worth a listen.)

“Buffalo Soldier” – The Flamingos (#88). At seven minutes, a lot of radio stations passed over this one without even hearing it. It’s not the same as the Bob Marley record which came out in 1978, either. This moves two notches and then disappears, ending a run of singles for the band that started in 1959 and included “I Only Have Eyes For You,” which may be one of the finest records every made by anyone who ever lived.

“Make Me Smile” – Chicago (#89). In my world you do the full intro on this (and the extended finish) or you don’t do it at all. Of course, it was the just-under-three-minute single version that was the huge hit, making it up to #9 and giving the band their first Top 40 hit.

“Don’t Stop Now/Since I Don’t Have You” – Eddie Holman (#90). This one is interesting. Holman first released the song in 1966, and it missed the Pop charts. This 1970 re-recording makes it and heads up to #48. The flip side is of course a remake of the Skyliners’ 1959 classic, and I think I’ll stick with the original on that.

“Mississippi Queen” – Mountain (#92). You know what this list needs? Cowbell. This classic rock staple heads all the way up to #21.

“Hang On Sloopy” – The Lettermen (#93). Oh, this one has cowbell, too, and if it were to go any slower it would stop. This will only spend two weeks here and not move off this spot. If you are a younger reader and are unfamilar with this song, please don’t click the first link that I provided. Click this one instead. Trust me.

“My Wife, the Dancer” – Eddie and Dutch (#94). Don’t let the intro of this one fool you – it’s a bit risque for the Top 40. And yet it almost made it, stopping at #52. While the Chicagoans responsible for this didn’t get airplay at home, it made #12 just to the north on WOKY/Milwaukee and was a #8 record on WBGN in Bowling Green, Kentucky.

“Cole, Cooke and Redding” – Wilson Pickett (#95). Oh wow status activated here. A legend himself pays tribute to three other legends, in the style of “Abraham, Martin, and John.” This only makes it to #91; the other side of the single will chart in a few weeks, and that one is the hit.

“Lucifer” – Bob Seger System (#98). I hit play on this one, let it roll, and then played it again. There’s traces of “East Side Story” and “Ramblin’ Gamblin’ Man” in it, and that’s just fine. It’ll only chart at #84 nationally, with local airplay in Detroit (of course) and Fort Lauderdale, where it’s a top ten record. WSAC in Fort Knox, KY bumps it as high as #2.

“Lay Lady Lay” – Ferrante and Teicher (#99). This is the second Dylan cover of the week. It’s got the guitar sound of Vinnie Bell on it as well, just like “Midnight Cowboy” from 11/1/69. It’s as if elevator music could swing; I sort of like it, and I am not really sure how to feel about that.

“My Soul’s Got a Hole In It” – Howard Tate (#100). One last soul shot for the week to wrap up the list. This is the only week it spends on the chart, and is the last record for Tate to cross over to the Pop list.