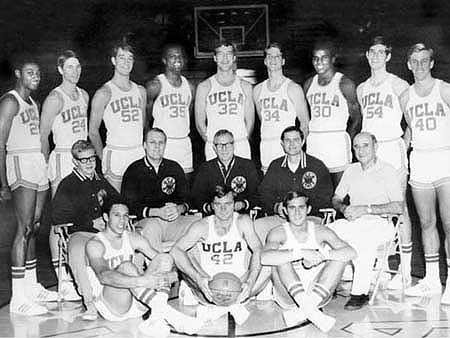 (Above: We don’t put folding chairs on the court enough anymore.)

It’s a big day in college sports. UCLA claims the NCAA men’s basketball championship, defeating Jacksonville University 80-69. That’s right – Jacksonville, home of the Dolphins, which has just over four thousand students today and in 1970 was the second-smallest school ever to make the Final Four. That same day Cornell won the ice hockey championship, completing the only perfect season ever (no losses, no ties) with a 6-4 win over Clarkson.

On the charts: it’s week #4 at the top for “Bridge Over Troubled Water.” But there’s a lot of new stuff this week that you know. This makes up for the short list last week.

“Let It Be” – The Beatles (debut at #6). It’s very rare to have songs debut in the Top 40, let alone in the Top Ten. But, it’s the Beatles. The hype over this record coming out moved a lot of copies in its very first week, earning it an immediate spot in the top 10. It’ll be log-jammed for a couple more weeks but then it will become the band’s second-to-last #1 hit.

“American Woman/No Sugar Tonight” – The Guess Who (#46). I told you this was a solid week. Two hits for the price of one single on this one. This will also go on to #1 as a double-sided hit. For my money, I prefer the B-side paired with “New Mother Nature,” but your mileage may vary.

“Turn Back the Hands of Time” – Tyrone Davis (#72). I will never not play this song at an irresponsible level of volume. This one goes on to spend two weeks at the top of the R&B chart but only manages to peak here at #3. Still a respectable showing for a song I can’t get enough of.

“Little Green Bag” – George Baker Selection (#82). And now, in your mind, you are picturing the cast of Reservoir Dogs walking in slow motion. (Or, at least, hearing Steven Wright’s hilarious take on a bored disk jockey.) This one makes it up to #21. It was also one of those records I seemed to draw every weekend on my show at WCFL/Morris. (Not that I minded.)

“Dear Prudence” – The Five Stairsteps (#85). With a list this great, what’s it going to take to get an “oh wow” out of me? Something like this. It’s a cover that’s fairly true to The Beatles’ original with just a little bit of funky undertone. This is the flip side of their massive hit “O-o-h Child” that made #66 in its own right. We won’t link to that yet, since it’s not yet on the charts. This side hit first.

“Funky Drummer (Part 1)” – James Brown (#86). We’ve also got one of the most-sampled records on the list this week. By itself, “Funky Drummer” is a #51 record that doesn’t get a second look. It’s been sampled over 1500 times; you don’t get “Fight the Power” by Public Enemy without it. Or LL Cool J’s “Mama Said Knock You Out.” Or Nicki Minaj’s “Save Me.” Or the theme to the Powerpuff Girls. You get the idea. (The long version is here if you can’t get enough; cue to 5:20.)

“Nothing Succeeds Like Success” – Bill Deal & the Rhondels (#88). I always liked this one, and can’t quite explain why. That said, I resisted the temptation to play it too often on my stations. (45 night at my house is a different story.) It’s a #62 hit, which is probably about right.

“I Would Be In Love (Anyway)” – Frank Sinatra (#89). We’re still getting the Chairman on the charts. This will spend three weeks here and peak at #88, but it gets a lot of play over on your parents’ soft station as a #4-charting Adult Contemporary hit.

“Funky Chicken (Part 1)” – Willie Henderson & the Soul Explosions (#91). Man, this is a solid list, isn’t it? I think I need this as a ringtone, but not until I can venture out into public again. Is it me, or do I hear “ABC” in here? This only crosses over for two weeks and stays right here at #91, with more airplay on Urban radio in NYC and Chicago.

“You Keep Tightening Up On Me” – The Box Tops (#92). If I closed my eyes, I’d have guessed The Grass Roots as the artist on this one. This spends two weeks at #92 and disappears, and represents the last time we see The Box Tops on the pop charts. This makes it to #8 on WSRF in Fort Lauderdale, Florida.

“Hitchin’ a Ride” – Vanity Fare (#93). This has been on my personal greatest-hits list for years, and I can’t decide if it’s even my favorite record by the band. (“Early in the Morning” ranks highly, too.) Besides, there’s a lot you can do with the 13-second intro on this one. It goes on to become a massive #5 hit. Maybe it gets the nod for the great air piano solo you can do.

“Children” – Joe South (#95). This one gives you no intro to work with. It’s got that signature South sound, but doesn’t do as well as his others. (It could be the chorus near the end that does it.) It’s a #32 single on the Adult charts but only manages #51 here.

“Time To Get It Together” – Country Coalition (#99). This is the only record to chart for this group; it will spend three weeks on the list, and stop at #96. Don’t confuse this with the Marvin Gaye song of the same name, although I don’t know how you could.

“I Got a Thing, You Got a Thing, Everybody’s Got a Thing” – Funkadelic (#100). Now that we’ve conjugated “got a thing,” let’s look at the record. How the wah-wah pedal survived the session I have no idea. This is solid funk. It goes no higher than #80, but it’s huge in Detroit. The Big 8 CKLW lists this as a #1 record while it makes #2 on WKNR.