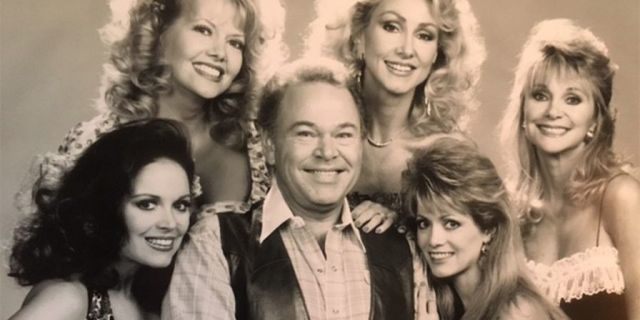 (Above: Roy Clark and friends.)

Some people you know are turning 50 this week. Today’s the birthday of tennis star Steffi Graf, who is born in West Germany (back when that was still a thing.) Tomorrow O’Shea Jackson will be born in Los Angeles; you know him as Ice Cube.

Tomorrow a new television show makes its debut: Hee Haw takes the time slot previously held by The Smothers Brothers Comedy Hour, which saw cancellation earlier in the year by CBS after no small amount of controversy. Denounced by critics as “a hayseed Laugh-In,” it runs for two years on the network and stays in syndication until the early 1990s. (It’s been picked up again due to the wonder of cable.)  Singers Roy Clark and Buck Owens host the show; we’ll hear more from Roy down below.

Also on the 15th: Georges Pompidou is elected as the president of France. Coming up on Tuesday Soviet Boris Spassky will be crowned as World Chess Champion, defeating fellow countryman Tigran Petrosian after 24 matches.

On the charts: It’s week #4 for the Beatles at #1 with “Get Back.” They also have the highest-debuting single out of what is mostly a list of also-rans, so let’s get right to the list….

“The Ballad of John and Yoko” – Beatles (debuts at #71). This will go on to be a #8 record, despite not getting any airplay on some stations (WLS/Chicago was one of them) over the use of the line “Christ, you know it ain’t easy” in the refrain. Surprisingly, it hit #1 on both WGRD and WLAV in Grand Rapids, Michigan, a city which tended/tends to run a little more conservative. For my money, there’s nothing wrong with the Percy Faith cover from 1970 if you need to liven up a party and not risk offending your guests.

“Yesterday, When I Was Young” – Roy Clark (#83). I wrote about this when Roy Clark passed last year; you can read that here. This will only make it to #19, surprisingly, but is a #6 single on the Adult Contemporary chart.

“Quentin’s Theme” – The Charles Randolph Greane Sounde (#85). Dickie Goodman fans may recognize it as one of the many theme songs of Walter Funkite. (Remind me to do a full post on Dickie sometime.) Fans of Dark Shadows know it from its more proper place on that show. This goes on to hit #13, because instrumentals do well. (Fun fact: Greane was married to Betty Johnson, who gave us “The Little Blue Man” in 1958, among others.)

“Dammit Isn’t God’s Last Name” – Frankie Laine (#87). Here’s your first “oh wow” for the week. This is the last record that Frankie put on the pop charts. I’m willing to guess that you haven’t heard it in close to fifty years. It only goes one notch higher and spends three weeks on the charts. I could only find it reported on two stations in Pennsylvania and one in Australia. (If PDs weren’t sure about the Beatles lyrics above, this must have caused fits.) Of course, we’ll hear more from Frankie in 1974 when he does the theme song for a Mel Brooks movie.

“Don’t Wake Me Up In the Morning Michael” – The Peppermint Rainbow (#88). This one should have been a bigger hit; it’s damned catchy and there’s not much to dislike. Yet it only made it to #54 and represented the end of the line for this band. This gets a lot of play in a few places: it’s a top ten hit in New Haven, CT; Rochester, NY; Omaha, NE and Columbus, OH.

“The Days of Sand and Shovels” – Bobby Vinton (#90). Here’s one I completely forgot about. This goes on to #34, making it a bigger hit than the more fun record above, and it got a lot of play on “old people” stations, reaching #11 on the adult chart. This to me sounds an awful lot like Bobby Goldsboro’s “Honey,” if that record were about a relationship not working rather than a tragic death.

“It’s My Thing, Part 1” – Marva Whitney (#94). Oh, wow, indeed. It’s the answer song I didn’t know I needed, but I do. And why not? The Isley Brothers said that the thing was for the taking, right? This will only make #82, but it’s worth the listen. (And yes, it’s a James Brown production, which is also why it sounds vaguely familiar.)

“Funny Feeling” – The Delfonics (#95). Oh, you thought they only did sappy songs that would later be more sappily covered by New Kids on the Block? Check this one out. It only spends two weeks on the charts and stops at #94, but this is a decent record. (It charted higher in Philadelphia, their hometown.)

“Moonflight” – Vik Venus (#96). This one is a Dickie Goodman-style break-in record that, for my money, tries way, way too hard. That’s likely because it’s designed to sell product: all the records used are Buddah records releases, so you’re getting a lot of Lemon Pipers and the like. (Some of the jokes are a reach: “What’s that strange green instrument?”) Alas, that doesn’t stop it from reaching #38, making it a bigger hit than all but three of Goodman’s creations. The role of Vik Venus is played by NYC disk jockey Jack Spector.

“Gotta Get to Know You” – Bobby Bland (#98). The charts have been less soulful in the last few weeks, and Bobby is seeking to fix that. This one falls well short of being a hit, only reaching #91. But I’d play it. Several stations did, a lot: in Shreveport, LA this goes to #6.

“Tell All the People” – The Doors (#100). For as much of the Doors catalog that gets played to death and beyond, this one is rarely heard. It’s not a bad record, but I suspect it wasn’t a bigger hit because it sounds like Jim Morrison is trying to be Bobby Sherman. This will hit #57 and stop there; in the Midwest, a slew of stations place this in the Top 20.