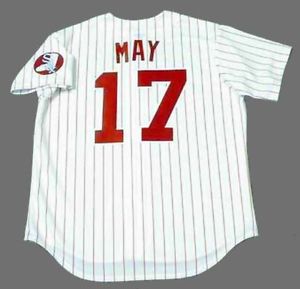 (Fun fact: Carlos May of the Chicago White Sox wore his birth date on his back.)

Space dominates the headlines: it’s the day that the Soviet probe Venera 6 begins its descent into the atmosphere of Venus. (It won’t survive the planet’s acidic rains and sweltering temperatures). The next day, May 18, Apollo 10 launches from Cape Kennedy. This is the “let’s see how it goes” mission before the big one comes up later this summer.

May 18 also sees the birth of Marta Marrero, who as Martika put a couple of singles on the charts in 1989. “Toy Soldiers” is the one you remember, and now I just stuck it back in your head.

The following Wednesday, May 21, Justice Warren Burger is selected by President Nixon as Chief Justice of the Supreme Court. This follows the retirement of Chief Justice Earl Warren, whose report you may be familiar with. Burger stays in that role until his retirement in 1986, when he will be succeeded by Justice William Rehnquist.

On the charts: THIS is the last week at #1 for “Aquarius/Let The Sunshine In (The Flesh Failures)” by the Fifth Dimension. (I had that wrong last week.) Watch for a new chart-topper next time after six weeks without a change.

“In-a-Gadda-da-Vida” – Iron Butterfly (debuts at #73). Of course, we’re talking about the 45 version here, since that’s the one that a) charted and b) could fit on the record. It also represents my limit with this one; if you prefer the full 17-minute version, here you go. The shorter rendition will make it to #30 at its peak.

“The April Fools” – Dionne Warwick (#77). Movie music here – the film starred Jack Lemmon, and the single snuck into the Forty, ending up at #37.

“You Don’t Need Me for Anything Anymore” – Brenda Lee (#87). And – we break that streak. This peaks at #84, although on the Adult Contemporary chart it will make it to #32. What strikes me about this record: Brenda, age 24, sounds well in her forties on this record.

“My Wife, My Dog, My Cat” – The Maskman and the Agents (#91). This is technically listed as a novelty record, but I don’t think of it the same way I think of, say, “Gitarzan.” It’s not necessarily funny so much as it tries to be a soul record, which it does a better job of accomplishing. This is as high as it will go, and it spends two weeks here.

“What Does It Take (To Win Your Love)” – Jr. Walker and the All-Stars (#93). This one sounds just as good the five hundredth time you hear it as the first. It’ll end up at #4 later this summer, tying “Shotgun” for the band’s best chart showing. (Bonus: Junior played this live on the Letterman show back in 1985, and it’s been saved and shared.)

“Why I Sing the Blues” – B.B. King (#94). Good luck hunting down the single version; you get the full-length LP track here. I figured you wouldn’t mind.

“Israelites” – Desmond Dekker & the Aces (#96). Dekker is a true one-hit wonder: one record that made the Hot 100 chart and nothing else. This will make it all the way up to #9.

“I Threw It All Away” – Bob Dylan (#99). This track from Nashville Skyline won’t move the needle much more – it only makes it to #85. The bigger hit from that LP will hit later in the summer.

“Sausalito” – Al Martino (#100). I’m going to guess that this one slipped your mind. It only climbs one more notch to #99. If you’re an easy listening fan, though, it might ring a bell as it ends up at #13 on the Adult Contemporary chart.