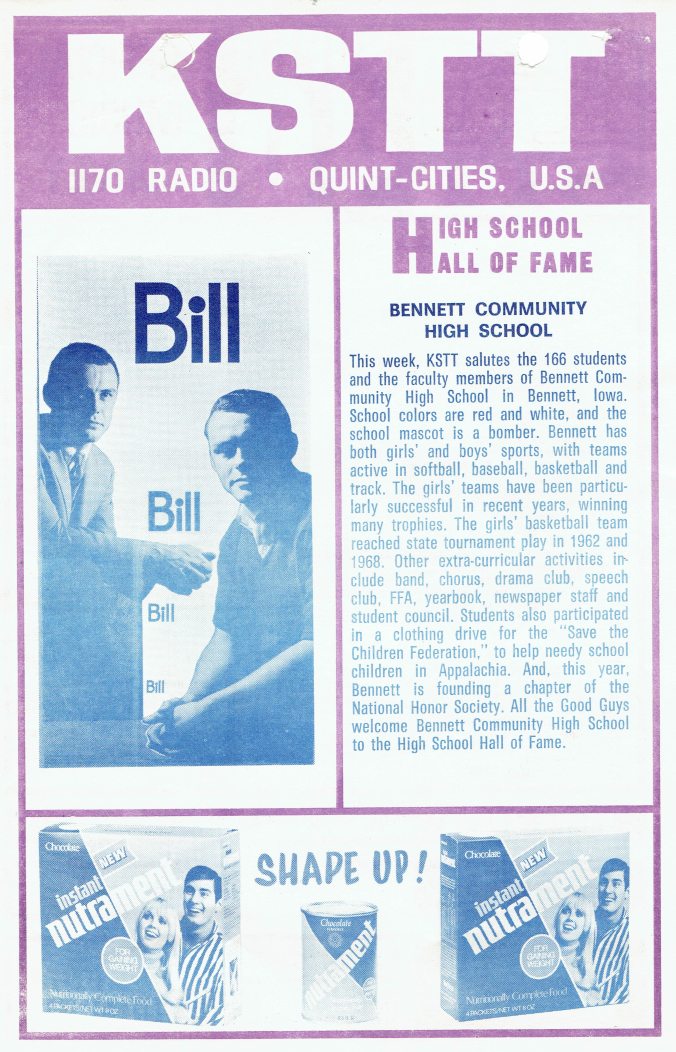 (Congrats on that High School Hall of Fame induction, BCHS!)

Back in the early 1990s I worked at 97X, legally known as WXLP-FM in Davenport, Iowa. The station was safely tucked away in the former funeral home we called the Rock and Roll Mansion. WXLP had a sister station, KSTT, that was a legendary Top 40 AM in its day. One night, with too little to do, I browsed through a pile of old station memorabilia and came upon a pile of old playlists. Ironically, this was almost exactly 25 years before I’d defend a doctoral dissertation based on the analysis of these things. I thought “huh, cool,” found the one with the date closest to the day I was born, left the rest, and took it to my desk to hang up. A few months later, when I left the station, I took the survey with me among my personal effects. It’s the only KSTT survey that I have, and I really wish I’d have just grabbed the whole pile. WXLP/KSTT was sold a few times since then, and modern radio operators tend to have little if any interest in the histories of their stations. (After I defended, I reached out to the station manager of Townsquare Media in Davenport to ask if the surveys still existed. I wanted to get copies for further research. My e-mails and voice mails were unreturned.)

So, I’ve got one piece of the station’s history, and it turns 50 years old today. Let’s see what was big in the Quint Cities (East Moline used to fare better, I guess)….

At the top – it’s “Galveston“ from Glen Campbell, which moves up seven places from #8 last week.

28. “Only the Strong Survive” – Jerry Butler (new this week)

33. “The Way It Used To Be” – Englebert Humperdinck (new this week)

In addition, the list features six “Good Guy Klimbers.” These are likely on the survey next week; since I don’t have next week’s chart, we can only guess.  They are:

“Blessed Is the Rain” – Brooklyn Bridge

“Idaho/Something’s On Her Mind” – The Four Seasons

Most of these records either have been (or will be) written about on the various weekly “new adds” charts, so I won’t do that here. I do notice that in some ways the KSTT survey seems ahead of the game: note that they’re already tired of “Dizzy” the same week the rest of the country has it at #1. In other cases, they seem to be adding things a little later on the draw, and overall the list is pretty safe. (I’d love to hear Bubble Puppy next to Brenda Lee, though.)

I’m really glad I pulled this chart from the pile. I’m sort of sad that the rest of them were probably carted to a Dumpster by some intern in the early 2000s.

One thought on “Fifty years ago in the Quad Cities: The KSTT-AM Super 40 Official Music Survey, March 20, 1969”