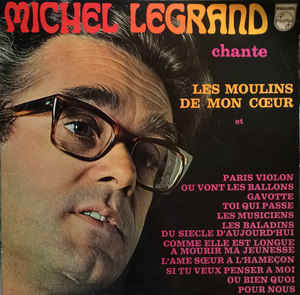 Michel Legrand passed away in Paris yesterday at the age of 86.

Here’s where it’s tempting to say “Where do I know that name from?” It could be from the three Oscars that he one: one for Yentl, one for Summer of ’42, and one for The Thomas Crown Affair (the subject of this post). Add to that five Grammy awards for various compositions, and the over 200 television and film scores he worked on alone or with others, and it’s easier to understand the influence of his work on our popular culture.

Sometimes that effect wasn’t always as we’d expect. Legrand composed the soundtrack for the 1964 film Les Parapluies de Cherbourg (The Umbrellas of Cherbourg), which used the music to advance the story. That music, coupled with the stunning visuals, made the film a modern classic. (It also gave us “I Will Wait For You,” which you’ve no doubt heard before.) It also provided the inspiration for Flight of the Conchords to create their French-language-lesson inspired “Foux Da Fa Fa,” which may have borrowed stylistically just a bit from the film. Everything comes around, I guess.

That brings us to the song I mentioned up top, which was the first one that I thought of when I heard the news. “Windmills of Your Mind” won the Oscar for Best Original Song at the Academy Awards in 1969. If you’ve seen the original Thomas Crown Affair, you’ll recognize it immediately from the opening credits, as performed by Noel Harrison (whose father did OK in musical theater also). Andy Williams, interestingly, was the first choice of the film’s producers, but he passed on the opportunity. In any case, Harrison’s version was released as a single; it did nothing in the US, but was a Top 5 charter in the UK. Over here, Dusty Springfield’s version was the hit, making it into the Top 40 later in 1969 (which means we’ll read more about it soon enough). To further add to the confusion, neither of them sang it at the Academy Awards broadcast; that honor went to Jose Feliciano, whose version of the song was the hit version in The Netherlands and Turkey. Where you go depends on who you hear, I guess.

In any case, it’s a great – if haunting – record that, were I still pulling out Oldies for a daily audience, would be getting play today.

You can sing along with Noel, if you’re good. Hear “The Windmills of Your Mind” by clicking here. (A clearer version, with some movie highlights, is available here.)