(Above: The good folks at Woolworth’s shouldn’t have stamped across Mr. Merchant’s picture like that….)

January 8, 1969 was a Wednesday. In Chicago, Robert Sylvester Kelly was born; he would go on to have a starried if not controversial career as an R&B singer without his middle name and only an initial. In Miami, New York Jets quarterback Joe Namath tells the crowd at the Miami Touchdown Club that he “guarantees” a win on Sunday in Super Bowl III. (He is correct.)

First – the “hitbound” records this week are “Mendocino” by the Sir Douglas Quintet (seen here hanging out with Hef on Playboy After Dark), “Good Vibrations” by Hugo Montenegro, and “The Grooviest Girl In The World” by the Fun and Games. I’d say they went one for three picking hits on this one, although “TGGITW” isn’t bad for bubblegum. (The survey says she’s the grooviest girl in town rather than the whole world, so the bar has been lowered.)

Now – on with the countdown:

29. The Royal Guardsmen – “Baby Let’s Wait” (28).  The last time I looked at a GR chart was November, and this was still there. I think it fared better here than nationally.

28. The Turtles – “You Showed Me” (hitbound). This was new to the Billboard chart on January 4th, so WGRD’s a little ahead here, as they tended to be.

26. Bill Deal and the Rhondels, “May I“ (hitbound). This is a record that I always loved, and as a baby DJ I thought that they were a black soul group. Turns out they’re really a bunch of white guys from Cincinnati. The more you know.

25. The Impressions – “This Is My Country“ (26). Now here’s a REAL black soul group, and a song that you might be surprised to find on a GR chart. Then again, WGRD in the late 60s was pretty soul heavy. From a social justice standpoint, perhaps a re-release is in order.

24. The Avant Garde – “Fly With Me“ (24). The playlist misspells the band’s name, but there’s no mistaking who they are. They’re more famous for “Naturally Stoned” and for starting the career of game show host Chuck Woolery, who was in the band. Not a hit, but not a bad little record, either.

22. Jay and the Americans – “This Magic Moment“ (hitbound). I’m generally a fan of originals versus covers, but here’s a case where both of the versions of a song are solid. (Slight edge to the Drifters, though.) This hasn’t made the Billboard Top 40 yet, but it’s climbing.

21. The Four Seasons – “Electric Stories“ (hitbound). We like to think of the 4 as an early-60s doo-wop group or as Frankie Valli crooning. We don’t think of them as rocking out, and they do here.

19. Dion – “Abraham, Martin, and John“ (8). 1968 was, of course, a year that Facebook would describe as “it’s complicated.” This Dion tribute now typically comes out once or twice a year. Expect your local station to play it on January 21.

18. The Road – “She’s Not There“ (23). Once you hear this, you don’t need the Zombies version. The Road hailed from Buffalo, NY, and charted nowhere – except in Greece, apparently, where this was a hit.

17. The Foundations – “Build Me Up Buttercup” (22). Another case of WGRD being on a song before Billboard got around to it.

16. Canned Heat – “Going Up the Country” (19). It seems like I always see this in conjunction with Woodstock in modern pop culture. At least they got the year right? 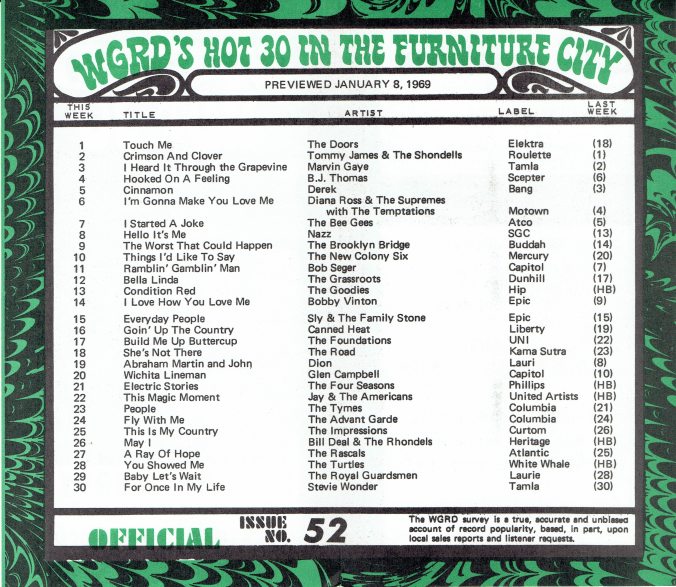 (Groovy, baby. Note that this is “a true, accurate and unbiased account.”)

14. Bobby Vinton – “I Love How You Love Me” (9). GR did love its Bobby Vinton, and late 60s pop charts always have that “Now here’s one for you parents” entry in there.

13. The Goodies – “Condition Red“ (hitbound). This was a much bigger record here than it was nationally, and – lest you think we were done with teenage tragedy – it’s not a happy story. Think of this as “Leader of the Pack Redux.” Around this time a Grand Rapids singer named David Idema likely heard that tragedy was still selling, changed his name to David Geddes, the 70s happened… and that’s a story for another day.

12. The Grass Roots – “Bella Linda“ (17). This is my periodic reminder to Oldies programmers that The Grass Roots charted fourteen records in the late 60s, and some of them weren’t “Midnight Confession.” Branch out, will ya?

11. Bob Seger System – “Ramblin’ Gamblin’ Man” (7). Seger played what is expected to be his final concert in Grand Rapids this past weekend, and worked “The Famous Final Scene” into the show. Many think the career started with this one, but Michigan stations had been playing him before this one.

10. The New Colony Six – “Things I’d Like To Say“ (20). Chicago wasn’t the only place that this band was huge; of course, with WLS and WCFL screaming across the lake at night, there were plenty of opportunities to hear their work.

9. The Brooklyn Bridge – “Worst That Could Happen” (14). Trying to decide which is the worst wedding on record: this, or “Band of Gold” by Freda Payne.

8. Nazz – “Hello It’s Me“ (13). You more likely know it as a Todd Rundgren solo record, but it had a different beginning. Todd was, of course, a member of this group, and this was the original vision for the record. Nationally this stalled at #66, but in GR it’s in the Top 10.

7. The Bee Gees – “I Started A Joke“ (13). For as strong and soulful as this list started out, we’ve gotten awfully mellow inside the Top 10. Classic hits radio seems to prefer the falsetto/helium Bee Gees to these records, which I never agreed with. (Then again, I’m not programming anymore, am I?) That said, this one’s a party killer.

6. Supremes/Temptations – “I’m Gonna Make You Love Me“ (4). With star power like this on the label, how could it miss?

4. B. J. Thomas – “Hooked On a Feeling“ (6). This song is much better when a) blasting out of a single speaker in the dash and b) not accompanying a creepy video of a dancing baby (younger readers, look it up).

3. Marvin Gaye – “I Heard It Through the Grapevine“ (2). It’s #1 around the country, but in GR it’s on the way down the chart. In much the same was #4 is better without an animated baby, #3 is better without claymation raisins.

2. Tommy James and the Shondells – “Crimson and Clover“ (1). Last week’s top song wasn’t there long. I preferred the longer version that was included on the Roulette Records greatest hits LP and used to sneak it in on mornings where, frankly, I needed a minute.

And… up seventeen places to #1 this week – The Doors – “Touch Me“ (18). The Doors were a band that was absent from my parents’ record collection, and in junior high school I picked up the greatest hits LP. That drove me to seek out the album tracks. The Doors are a polarizing band in that for every bit of self-indulgent crap they did, they managed a piece of art. This falls into the art category. I do like this version as performed on the Smothers Brothers Comedy Hour, which shows examples of both things I mentioned.  (If nothing else, it’s refreshing to see an act actually singing rather than lip-synching on television.)