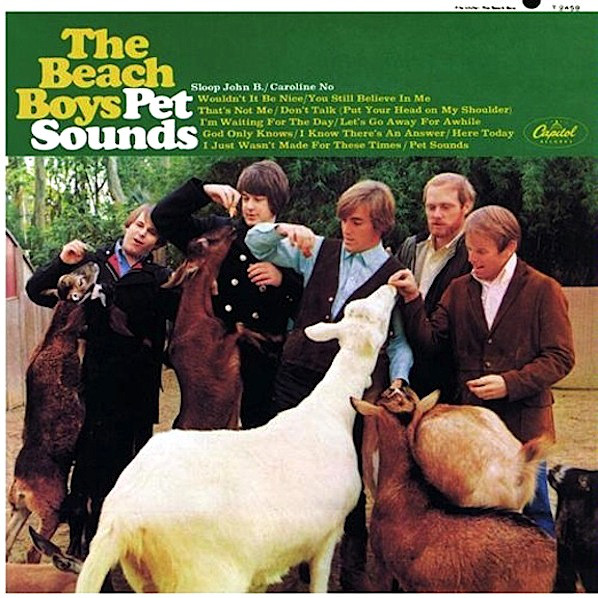 We’re getting closer to the top.

I guess I was always a Beach Boys fan.

When I got my first collection of 45s at the age of 4, one of the records in the pile was “Wouldn’t It Be Nice.” As a small child I played it over and over. When I got a little older, I flipped the record over and discovered “God Only Knows,” which may be one of the most perfect pop songs ever written. I had no idea that they were from an album that was one of the most remarkable achievements in pop.

I didn’t have many more records than that.  While my parents had Beatles LPs, the only Beach Boys album they had was Volume 1 of the Greatest Hits. I listened to it anyway, and around the time I found it – fifth grade – my classmates started getting into them, too.  Some of the girls in the class decided that the Beach Boys were cool, and brought their records to school for playing during recess in the winter. I had just decided that maybe the girls in my class weren’t so yucky, and used a little of my record money to find the Volume 2 that went alongside Volume 1. It added “Don’t Worry Baby” to my collection, and got me appreciating the band’s harmonies.

That was it for several years. Oldies stations played the hits, and I knew what they were. Fast forward to early 1990. I was living in Macomb, Illinois in-between radio jobs. My first big full-time job at KRVR in Davenport had crashed and burned. But I was still in touch with a friend from the job I held at WJTW in Joliet before that. (This was back in the day when people exchanged pleasantries by writing them on paper, putting them in an envelope, affixing a stamp, and waiting a few days for them to arrive.) We got to talking about music, and she professed a love for the Pet Sounds LP. Having never heard it, and respecting her musical opinion, I went to find a used copy and see what the big deal was.

And, holy crap. I dropped the laser (it was a CD copy and not a vinyl copy) on it, and the first thing I heard was “Wouldn’t It Be Nice.”  I know this, I thought, thinking back to the scratchy 45 in my old bedroom. But that’s where the trip got more interesting. There, laid bare, was the inner workings of Brian Wilson, 22-year-old boy genius. From the first track it went to “You Still Believe In Me” and “That’s Not Me.”  Tortured artist, I thought. And that’s when it hit me: Me, the 21-year-old who wasn’t in the place I wanted to be, trying to make sense of whether or not my career was over before it started, and determining where I fit into the world, was in the same place Brian Wilson was in 1966. I wrote earlier on “I Just Wasn’t Made For These Times,” which was the song that really drove it home for me.  It was OK not to fit in. And, it all made sense: why my friend liked this album, why it was important, why I needed to hear it – hell, why, even after having established myself in two different careers, it’s still necessary to hear it every once in a while.

There’s not a lot to add to what I’ve already written on this blog about Pet Sounds. But still, 28 years after finding my first copy, it’s still right up at the top of my list. But, in keeping with all of the other entries in the Top 10, I’ll highlight a track. Pet Sounds contains two instrumentals.  One of them, “Let’s Go Away For a While,” showcases just how talented a songwriter Brian Wilson was. It’s a positively beautiful piece of music, the type that brings chills, hair standing on end, and perhaps a tear. When asked about the piece, he simply smiled and said “Just try and hum it.”

Go ahead.  Try and hum it.  You can hear “Let’s Go Away For a While” by clicking here.