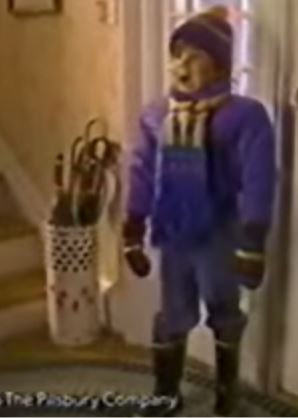 (Above: They should have let the kid walk.)

There was a commercial for Pillsbury Cookies in the 80s that my wife and I quote often. You may remember it (if not, allow me to remind you). There was a kid threatening to run away from home, and Mom gets him to stay by making cookies as his threats taper off. It starts with the kid yelling “I’m…. LEAVING!” It’s an empty threat. We quote this because over the years we’ve worked with people who are like this: a lot of rabble-rousing about quitting if they don’t get their way, and of course they never do.

I was also this kid on several occasions, most notably 30 years ago. As the management team for WLRA was selected for the 1988-89 school year, I was left off of it. It was a case of “there are things that we wanted done and didn’t tell you to do, and you didn’t do them, so therefore you are not living up to expectations.” In hindsight, this was excellent preparation for the world of work, since this sort of thing happens all of the time. But at 19 and knowing everything, I was having none of it. I decided that maybe I wouldn’t return to WLRA or to the university at all in the fall, and that Tuesday, May 3 would be my last show.

Unlike the show from earlier in the semester, there are no long sets of talking about things only students would find interesting. The music selection is tighter. This, clearly, is my first real attempt at doing a show for the sole purpose of making a demo. Radio personalities do this when they know they’re about to shop for a new job: make sure to record a show, try too hard, and hope it all works. Over the years I’d learn that my best demos came from shows where I forgot that I was recording. I was more relaxed and natural and less forced.

While the jock patter could use a lot of work, I might dare say that I put together a pretty good set list that night. Perhaps I should have been looking for a music director job?

Here’s what got played:

First set: “Stay With Me” – Rod Stewart and the Faces, “Revolution” – The Beatles, and “Truckin’” – The Grateful Dead. What a long, strange trip it’s been.

#3 – “Can’t Stand Losing You” – The Police, “Waiting For the Bus/Jesus Just Left Chicago” – ZZ Top, “Cadillac Ranch” – Bruce Springsteen. Can I just say that we don’t hear that ZZ Top song enough, and I’d rather hear it than anything from the 80s?

The 7pm legal ID is followed by Monty Python’s “Spam” routine, because of course it was.

#4 – “Walk This Way” – Aerosmith, “Good Lovin'” – The Rascals,” and “Rumble Seat” – John Mellencamp. That last one is another song that doesn’t get nearly enough airplay.

#5 – “The Boys of Summer” – Don Henley, “Paint It, Black” – Rolling Stones, “Peace Frog” – The Doors, “Gimme Some Lovin'” – Spencer Davis Group, “Ah! Leah” – Donnie Iris. Mix in “I Bet You They Won’t Play This Song On the Radio” by Monty Python, “Go All the Way” – The Raspberries, “The Breakup Song” – Greg Kihn, and “Intruder/Pretty Woman” by Van Halen, and I would listen to this radio station all day. (I feel a Spotify list coming.)

Set #6 has “Baby Blue” by Badfinger, “Dream On” by Aerosmith in a fit of poor artist separation, and “Going Up the Country” by Canned Heat.

The 8pm legal ID is followed by the National Lampoon’s parody “Deteriorata.” You are a fluke of the universe, you have no right to be here, and whether you can hear it or not, the universe is laughing behind your back. (30 years later and I teach the National Lampoon Radio Hour in a college classroom. A long strange trip indeed.)

#7 – “Sister Golden Hair” – America and “Rocky Mountain Way” – Joe Walsh follow the Lampoon track. There’s a backsell here, and the anticipation of the end of the show is starting to become prevalent.

There’s a break to do the celebrity birthday list. It’s done over Englebert Humperdinck’s “Release Me,” since he is on the list. At one point I am singing along with it. What a weird kid.

Set #9 consists of “I Got You (I Feel Good” by James Brown, “Jammin’ Me” by Tom Petty, and “Surrender” by Cheap Trick. It’s followed by a long, drawn-out goodbye message (“I’m…. LEAVING!”), which is – of course! – followed by “Free Bird,” because it HAD to be the last song on the show.

After the show was over we had the end-of-the-year awards night and drinkfest. It’s the night where I was awarded “Most Arrogant DJ” and the “No Ass Award.” Those who were a part of WLRA will get the second one, and those who knew me at the time would certainly understand the first one. Both awards are in my office at Grand Valley to this day, confusing students on a semi-regular basis. 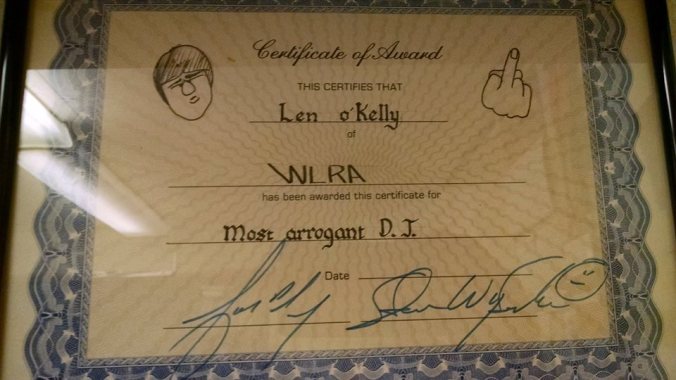 We all got liquored up at the event and went back on the air for incoherence at around one or two in the morning. That tape is secured safely at my home. (At one point someone points out that our FCC licenses prohibit the broadcasting of “unintelligible sounds.” A round of simulated flatulence follows.) What I think is most telling about that is the promise of a “last show” lasted approximately four hours.

Epilogue: About a week or so later I had an interview for admission at Augustana College in the Quad Cities. I had an uncomfortable interview with the dean of the college and one with a man named Dwight Pallmeyer, who now works for Widener University in Pennsylvania. Dwight was selected for me to meet with because he worked with the students who were interested in radio and was the faculty advisor for the school’s student radio station, WAUG. I brought the tapes of this show to the interview, and we listened to parts of it. Pallmeyer stopped the tape and said “I normally wouldn’t tell a student this, but you have no business being in college. This sounds better than a lot of what’s on the radio here.” A few weeks later I got a letter from the college formally declining my application. The letter stated that “it would not be in your best interest to admit you to the college.” Needless to say, the “most arrogant DJ” revved up for an even greater lap.

Of course, I returned to Lewis in the fall, did the morning show, polished the act, and in two months got hired at WJTW in Joliet. By the subsequent winter semester, I even followed Mr. Pallmeyer’s advice, checking out of the university. (Edit: Now that I have found out that he’s still alive and well and teaching, I should reach out to him and thank him for the conversation.)

I returned for a class in 1992, left again, and then came back to finish the degree in 2004. They didn’t even have to make me any cookies.