(Above: What was Frances McDormand’s line from Almost Famous?)

Fifty years ago today – April 3, 1968 – Paul Simon and Art Garfunkel released the LP Bookends. This was one of the first LPs that I recovered from my parents’ stash upon finding that they had more than just 45s in a box. (I touched on playing a copy of it in the post about “Old Friends” from November of 2016.) The exact date is lost, but I know that by the time I was in the third grade this one was in rotation in my room.

I didn’t immediately take a shine to all of the songs on it. Third-grade-Lenny preferred “Punky’s Dilemma” and “At the Zoo” at first – songs about cornflakes and animals respectively. Later, after seeing The Graduate, “Mrs. Robinson” made more sense. But it wasn’t until college radio that I was digging deeper into the LP for other tracks. The fall of 1988 saw my WLRA morning show take form at the same time the Bangles had covered “Hazy Shade of Winter” for the soundtrack of Less Than Zero. I usually passed over their version for S&G’s original, which has the extra couplet about unpublished rhyme/vodka and lime. I wasn’t adverse to throwing oldies in anyway, so this one seemed a logical choice.

But the album’s more complicated than that. Dan Epstein wrote an excellent piece in The Forward wondering aloud if Bookends is “the Jewish Sgt. Pepper.” I hadn’t thought about the parallels and similarities between the albums until reading his piece (which I recommend that you check out as well). The sonic complexity of “Save the Life Of My Child” wasn’t something I had considered before in that context, and I’m now wanting to go back and give “Fakin’ It” another listen. (Fun bit of trivia: in a day and age when keeping a single under 3 minutes was still important in AM radio, the single version of “Fakin’ It” was released with the time at 2 minutes and 74 seconds. Clever.) 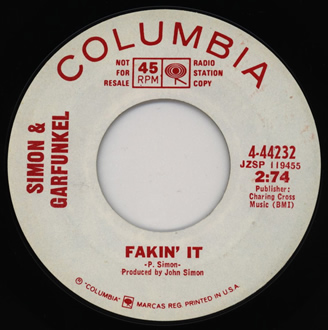 (You’re not fooling anyone.)

That brings us to “America.” I was in the habit of working this song into the college morning show on occasion. It lined up nicely with that time in life when leaving college and setting out on my own – to go off and look for America myself – loomed near. I was, after all, the first one in the family to leave Chicago with no intention of coming back when I moved to Davenport in 1989. (Spoiler alert: I came back.) I even sang the song more than once with “Davenport” in place of “Michigan” since the meter fit so well. Of course, that didn’t really make sense, since in the song they’re leaving Michigan. (Saginaw, specifically, which – having been there – I totally understand now.)

But the song is so pretty, and so accurately captures the sense of longing to see what’s out there in a world you really don’t know the size of, that it’s timeless. Another graduation season is upon us, and my students are starting to have the discussion about “real life” being around the corner. Many of them have – correctly – realized that not all the jobs are in west Michigan, and that they will have to, themselves, walk off and look for America. I should almost have it on a loop in my office for the next three weeks. For they possess the same ambition and determination that they will make it that I had as I decided to leave college, and it’s the same sense that Paul Simon sings about as he sits on the bus enjoying a Mrs. Wagner pie and figuring out who the spies really are. Some songs – and sentiments – are timeless.

Are you empty and aching and don’t know why? Perhaps the cure is here.