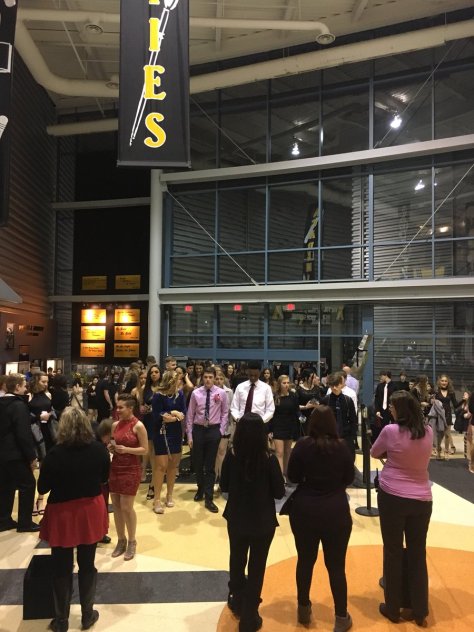 The power of Twitter: I learned that my old high school, Victor J. Andrew HS, is holding a dance tonight. It’s called “Just Dance.” It comes at the end of Spirit Week, which had a variety of activities to bolster pride in the school. Tickets for Just Dance are $20 – each.  That’s right.  Everyone apparently buys their own ticket, and it’s every boy and girl for themselves.

This is a far cry from the school dance culture of my high school days.  I wrote last fall that the two biggies were Homecoming and Prom, and that taking someone to Homecoming was done to see if you wanted to take them to Prom, and taking them to Prom was to see if you wanted to marry them. There were two other dances on the schedule: Christmas and Valentine’s Day. These were the “lesser” dances, since they weren’t quite as formal. (To wit: I wore a suit to Homecoming, but a sweater to either Valentine’s Day or Christmas.)

The Christmas dance was the only dance where girls were encouraged to bring guys as dates. In some cities it was called a “Sadie Hawkins dance;” ours was called “turnabout.” Valentine’s Day was a traditional dance in the sense that the guys were supposed to initiate the courtship. And no, you didn’t go without a date or as a group. When you bought your ticket, you were supposed to give your name and the name of your date to the Student Council. (I don’t know if any same-sex couples ever tried to buy tickets, but I’m guessing that something like that would have triggered at least a phone call home.) It was as if you had to register as a couple with the school, and didn’t even get to pick out lovely gifts.

While the VD, as it was humorously called, was a dance for couples, it was a little more informal. That didn’t mean that it wasn’t dominated by softer love songs. You could expect to have to do a lot of slow dancing at this one. Homecoming usually featured a live band; VD had a DJ, like the every-other-week sock hops that were held. That meant getting to hear popular records and – if you were so moved – make a request for a special song.

My time in high school, as far as VD was concerned, spanned the years from 1983-86. I went to the dances in both ’84 and ’85, but can’t remember what the ‘theme song’ of either dance was. No matter: I’ve got a chance to, with the use of the Billboard AC charts, find a bunch of songs that would have likely been played (or maybe should have been).

Let’s start with the top songs on the Billboard AC chart for each year:

Bob Seger, “Shame On The Moon“ (1983).  This was actually the #1 AC song on February 12, 1983, which might very well have been dance night. I can’t imagine a school anywhere picking a dance theme with the word “shame” in the title, but stranger things have happened.

Christopher Cross, “Think of Laura” (1984). Likewise, this was the song on the top of the chart through all of February 1984. Cross explained that it’s about Laura Carter, a college student killed by a stray bullet. That’s not setting the mood here. Also, name songs at school dance, especially if they are common names, aren’t going to go over well.  Anyone who broke up with a Laura and brought a different date was gonna get glared at.

Wham!, “Careless Whisper” (1985). Now we’re getting somewhere. This is a song that, to this day, I won’t turn off.  There. I said it.  It’s catchy, and the sax solo is the thing of legend. Someone did a mix on Youtube that features the sax solo for ten hours. Talk about setting the mood; for what, I don’t know, but it sets a mood.

1986 is tricky. There was a different #1 song each week. 2/1 featured Bruce Springsteen’s “My Hometown,” which is the opposite of romantic. 2/8 the top went to Sade and “The Sweetest Taboo.” A little more romantic, but again – I don’t see a school picking a theme song with “taboo” in it. By 2/15 the top song is Whitney Houston’s “How Will I Know,” which, given the transience of high school romance, is very appropriate for a dance theme. The final week of the month had Starship’s “Sara” claim the top position. See above, “Laura.”

What else was likely getting play?

Ashford and Simpson, “Solid“ (2/1985). This one topped out at #34 on the AC chart, but is a decent record that I thought would be higher. I can’t hear this song and not think of a story that my on-air co-host in New Zealand, Chris Cotton, told once while playing it. We had a habit of making up lyrics to songs that were popular, like “We killed this kitty with rocks and stones.”  Apparently in NZ they did the same thing, and this one was about having to take a dump. “Building up” and “building up” until stinking up the room… “And for fuuuuck’s sake……”

Atlantic Starr, “Secret Lovers” (2/1986). I’m guessing that schools picked this one as a theme. But how secret are you as a couple if you’re doing the slow shuffle in front of God, classmates, and chaperones? It was, of course, an eventual #1 AC hit.

Jack Wagner, “All I Need“ (2/1985). Oh, there was no escaping this record that year. It was “the song from that guy on General Hospital,” and it was on the radio a LOT. It was certainly played at dances, but I’m thinking the lyrics don’t necessarily fit. “All I need is just a little more time to be sure that it’s real” sounds like there’s not going to be a next date after this one, if they’re even talking at the inevitable dinner afterwards.

Steven Bishop, “It Might Be You” (2/1983). Of course, it’s from Tootsie. It was also almost certainly a theme song for a winter dance. Fun fact: Steven Bishop is “Charming Guy With Guitar” in National Lampoon’s Animal House.  You remember: he plays a song about a cherry that John Belushi ends.

John Cafferty & the Beaver Brown Band, “Tender Years“ (2/1985). The same band that hit it big with the song from Eddie and the Cruisers followed it up with this, which I remember being a staple of slow dances at sock hops for most of junior and senior years of high school. I can hear the song in my head, but, interestingly, I can’t come up with a single lyric to it. I’ll have to play it again and see if we should have been dancing to it or not.

Phil Collins, “One More Night” (2/1985). Phil alternated from catchy pop hits to softies for a number of years before settling into a string of almost MOR-sounding records by the 1990s. I vaguely remember this as a prom theme, but didn’t go to prom until I was in college. (Oh, pipe down. It was my freshman year, and I was 18. It doesn’t sound as awful as you think.)

Force M.D.’s, “Tender Love” (2/1986). I wondered why I hadn’t heard anything about this band since high school, and the reasons are tragic. Charles Nelson, who was 21 when this came out, died of a heart attack in 1995 at the age of 30. Antoine Lundy passed away three years later from Lou Gehrig’s disease at the age of 33. It was the biggest hit they ever had, just missing the top of the chart.

REO Speedwagon, “Can’t Fight This Feeling“ (2/1985). This one was definitely a slow dance favorite, and was (I believe) the biggest hit the band ever had. It was for sure on the AC charts, peaking at #3. I also remember, when us guys would go driving around, we’d turn it off unless there was a girl in the car, which was such a rare occurrence it’s almost impossible to measure.

The Police, “Wrapped Around Your Finger“ (2/1984). A love song? Well, it’s a little less stalkery than their best-known record – but I only remember the video with a bunch of candles getting knocked over and thinking that it was a fire hazard.

Corey Hart, “Everything In My Heart“ (2/1986). Corey Hart is mostly relegated to 80s weekends and limited to “Sunglasses at Night.” But he had some other songs that weren’t horrible, and I’d list this as one of them.

Joe Jackson, “Breaking Us In Two“ (2/1983). Of course they didn’t play this at the dance. But they probably should have, given the way the romances kindles by these dances typically played out over the following weeks. I’m sure I’ve mentioned this before, but after a few beers, anyone can sing Joe Jackson songs. Even without the beer, you don’t want to be trapped in a car with me and have this one come on the radio.

I have no idea how a February school dance would work now. It’s not a Valentine’s dance, they don’t go as couples, and there’s no theme to it. But I am sure that there’s going to be a slow song, and some guy’s going to ask some girl to dance with him, and that guy’s buddies are going to look at him on the dance floor with a girl they wouldn’t expect to see him with and think “What do you know?” Some things, after all, don’t change.