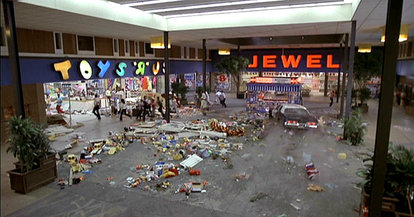 (Above: The mall used to get a bit trashed on the day after Christmas.)

In my career, I have worked in three main areas:

Of these three careers, only one of them involves not working on either Christmas or the day after, and that’s #3. I’ve said that my time in retail showed me one side of how lousy people can be, and my time in radio showed me the other. As far as the Christmas season goes, though, retail took the cake, and the day after Christmas was the worst side of that worst side.

You see, in the 80s, there wasn’t this “Black Friday” incentive to shop early.  The real deals came the day after Christmas when merchants reduced prices on stuff they didn’t sell, especially Christmas-themed merchandise. Kroch’s had gift and card departments, so things like boxed cards and wrapping paper all got lowered to 50% off on 12/26.  It was an “all hands on deck” day: if you were on the staff, you were assured of being scheduled to work eight hours to deal with the sales and returns. Oh, and get in a half and hour early if you want to park. At ten minutes to 10:00 a gathering of shoppers would huddle outside the glass doors to the mall space; at ten they’d open, and the crowd would RUN to the middle of the store to grab the “best” wrapping paper.  It was exactly like the scenes we’d see of people lining up for essentials in the Soviet Union; you know, the people we were “better than.” My job was to work the service desk, taking returns and selling things to people using charge cards. (Our store had this really weird system by which cashiers were allowed to handle cash and checks, but if you used a credit card you had to go to a completely different part of the store. This frustrated customers during the Christmas shopping season, especially after they had waited in line for ten minutes only to be sent somewhere else to do it again.) The first half of the day would be exhausting, and since there was that pressure for people to get the best stuff first, the last half of the day was actually pretty slow.

Then, lunch would come.  I had an hour to walk the mall and do a little shopping myself.  This was the time to spend the various gift certificates that would make their way into my stocking each year.  My family knew what I liked, but also knew not what I had already collected, so paper certificates (in a pre-gift card world) were just as good as money.  Initially they’d be to Musicland or Record Bar; in later years, when Red Tower Records opened up on the mall outlot, I preferred to shop there.  The owners gave DJs a 10% discount on all purchases, and I probably cost them enough over time to force the place to go out of business.

Christmas 1985 saw me get my first compact disc player: a demo model from one of the mall shops that played one disc at a time. By 1986 I had rigged up a portable into my car that played through the FM radio on an unused frequency. Therefore most of my spending of “other money” was for compact discs. Thirty years down the path it’s mostly impossible to see or know which ones were Christmas purchases. (A number of discs got stolen from me in college as well, so some may be long gone.) I do remember some of the titles that I especially looked for were greatest hits and compilations, in an effort to get the gift scrip to go even further. Somewhere, in a box, I know I still have one: Atlantic Soul Classics.  It was a good one:

1. Soul Man – Sam & Dave. (See above, The Blues Brothers.)
2. In The Midnight Hour – Wilson Pickett. Fun fact: Wilson Pickett had the same birthday – March 18 – that I do.
3. Respect – Aretha Franklin. I had no idea in 1985 that this song would figure prominently in a doctoral dissertation on radio and race. Hell, in 1985, I didn’t yet know that I’d ever set foot in a radio station. Life’s funny like that.
4. I’ve Been Loving You Too Long (To Stop Now) – Otis Redding. This is a fantastic track.
5. Green Onions – Booker T. & The MG’s. I had a bad habit, after a few beers, of insisting that this song had lyrics. “Onions… those big green onions… you put ’em in a salad, or you put ’em in some soup.”
6. Sweet Soul Music – Arthur Conley. I think I owe Bob Stroud’s Rock and Roll Roots radio show for introducing this to me in high school. Do you like good music?
7. Tighten Up – Archie Bell & The Drells. Archie was serving in Vietnam when this record went to #1.  They are wrongfully thought of as a one-hit wonder: “I Can’t Stop Dancing” is a tremendous track.
8. On Broadway – The Drifters. I cringed the first time we added the George Benson version at WJMK.  I mean, it’s good, but it’s not this.
9. Yakety Yak – The Coasters. I thought this sounded a bit out of place on this compilation.
10. What’d I Say – Ray Charles. The six-minute version is what’s on the disc.  Do not edit.
11. Just One Look – Doris Troy. Long before the Pepsi ads, I was digging on this.
12. Make Me Your Baby – Barbara Lewis. Admittedly, not my favorite track by her – I am more partial to “Hello Stranger” or even “Baby I’m Yours.”
13. Stand By Me – Ben E. King. Another absolute classic.
14. When A Man Loves A Woman – Percy Sledge. Read once that this was done in one or two takes. I can’t imagine it being done any better, and have heard it done much worse.
15. Shake, Rattle & Roll – Joe Turner. This track was an education for me, as I only knew from Bill Haley and the Comets. The more you know. 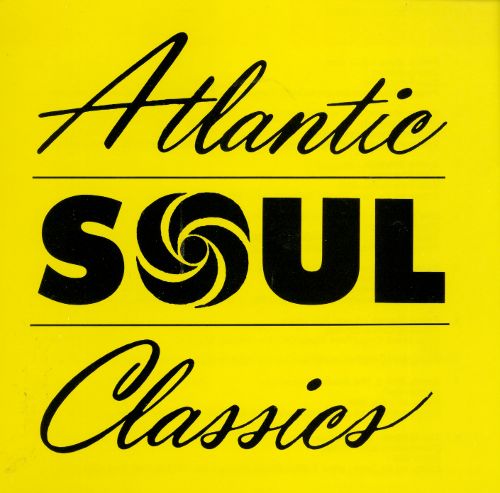 (Above: They spent more on the CD than on the artwork.)

This one got a ton of play in the car, and at home – heck, if I can find it over the holiday break, it’s going to play in my office at GVSU. And when I do, I’ll enjoy it on several fronts: the fact that it was a great gift, and the fact that I don’t ever have to stare down a pack of wild gift wrap shoppers ever again.

One thought on “‘Twas the day after Christmas, and all through the mall: Atlantic Soul Classics (1985)”