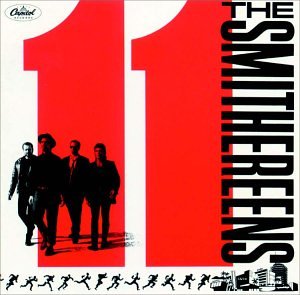 For the last year or so it’s felt like there’s been an increase in the rate of death in the music world. Basic math explains a bit of this: the Baby Boom generation + time = end of life. Rock stars in their 70s and 80s (and even 90s, in the case of some early pioneers like Chuck Berry) start to reach the end of their shelf life, and even though it shouldn’t come as a surprise, it does to the music fan. I’ve talked at length with my students about the role that nostalgia plays in popular culture: we like songs, in many cases, because they take us back to a time and place; they keep us young.  We expect the performers that created them to stay young, and when they don’t, it’s a shock that disrupts the nostalgia.

When the Gen X icons start to pass, it’s even more shocking.  That’s the thought I had this morning when I read that Pat DiNizio, the leader of the Smithereens, passed away yesterday at the age of 62.  (I was also surprised that he was 62.  I mean, I’m almost 49, and and I played them in college… it didn’t make sense at first.) This might not be a bad that you’ve paid any mind to in a while, but at the end of the 80s/beginning of the 90s, there was no escaping these songs.

The start for the band was slow.  After playing together for years, they finally landed a record deal and, in 1986, released Especially for You, their first LP of note. That album contained “Blood and Roses,” which garnered college airplay and – when featured on a episode of Miami Vice in 1987 – got a little more attention for the band. That’s when things started to pick up.  1988’s Green Thoughts, which served as my introduction to their work, contained “Only a Memory” a staple of MTV’s 120 Minutes and more than one of my college radio shows at that time.

11 was the breakthrough. The release of the album at the end of 1989 signaled the band’s arrival. It was their highest-charting LP (making the top 40) and put their first song in the pop Top 40, “A Girl Like You.”  Supposedly written for (and not used in) the film Say Anything, it’s a power pop song that just sounded great on the radio.  I was in my brief stint at WIUS-FM in Macomb, IL at the time this was gaining traction, and it became one of The Three LP’s that I think of when I recall early 1990: 11, They Might Be Giants’ Flood, and Michael Penn’s March.  (Apparently, I liked short titles.) Beyond the hit single the album contained some great tracks: “Blues Before and After,” “Baby Be Good,” and “Yesterday Girl” all made it on the air on my show.  But it was “Cut Flowers” that jumped out. There was something so haunting in its tale of loss that made me think it would be the next big single from the album.  As happened so many times, I got it wrong – but the song is still a work of art.

A few more releases followed: Blow Up and A Date With the Smithereens each made the top 200 LP chart, but the band had already reached its pinnacle.  The early 90s were more characterized by grunge, and I think (at least to my ear) that the Smithereens represented more of a Sixties throwback and, as such, didn’t fit.  Too bad.  They continued touring (putting on a terrific live show) and – as recently as 2013 – opened for Tom Petty, making those ticket stubs a macabre souvenir of 2017, in a sense.

“A Girl Like You” is still a tremendous tune to be played loudly.  I’ve been thinking again about getting back on to college radio this coming term.  If I can find a time slot (and if the students will have me), I’ll have to grab The Three LP’s and do a show at an irresponsible volume.

You can hear “A Girl Like You” by clicking here.