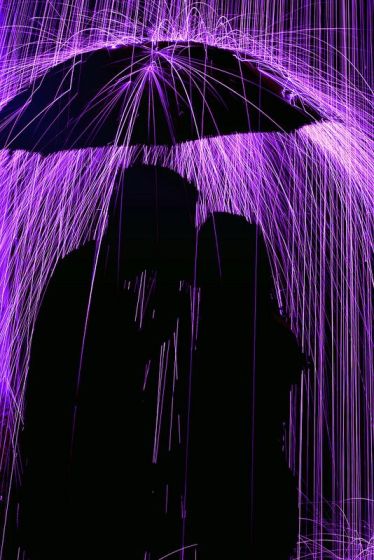 (Above: This sort of rain calls for a forecast of drama and commitment.)

Another weekend, another opportunity to catch the VJ Big 40 Countdown on Sirius XM’s 80s on 8 Channel.  This weekend they chose to go back to 1984 – my junior year of high school. It would have been right around Homecoming time that fall, so I am sure that more than a few of these songs would have been played at that dance. The ones that weren’t would have been played at the sock hops that were held at Andrew High School after every home game.  Those were important to attend, since that’s where everyone else was hanging out.  Friendships – and relationships, more importantly – began and ended at those mini-dances in the school lunchroom.

I may not have recognized many of them, though, since I was fully immersed in listening to oldies by this time.  Chicago’s WJEZ-FM flipped format to oldies two months prior, becoming Magic 104 – a station that, twelve years in the future, I’d be picking the music for. That was holding down the primary place on the radio in my room.

So, this chart may represent a bit of a surprise – what *should* I have been listening to as a high schooler?  Let’s start with the bottom of the list:

93. The Go-Gos – “Yes Or No.”  Another song that I would have thought would have been bigger, but this one stalled out at #84, its debut position.  This is the last time this one will see the charts, and it’s not a bad record.

91. Elton John – “Sad Songs Say So Much.”  I think I immediately recognize this one from its use in a Sasson Jeans commercial, where Elton reworks the lyrics to sell tight pants.

77. Bruce Springsteen – “Dancing In the Dark.”  This one I certainly would have known, and owned. Earlier in 1984 I had discovered The Boss, and while this certainly was getting all the attention, I was more likely listening to songs from Greetings from Asbury Park like “Growing Up.” (Of course, you’re watching the end of the video looking for a very young Courteney Cox.)

68. Billy Squier – “Rock Me Tonite.” I can’t think of this song and not picture the video.  There was one afternoon at 97X when I was giving program director Guy Perry a hard time about the music on the log, and I asked why I kept getting this record, and kept snapping my fingers to a rhythm while complaining.  Yeah, I was that guy.

62. .38 Special – “Teacher Teacher.” From the soundtrack of a film that just hasn’t held up – Teachers – it’s on the way down after peaking at #25. This was on the first day of school list I did a month or so ago.

60. Sammy Hagar – “I Can’t Drive 55.” This is a single that I bought long before I had access to driving at all.  I wouldn’t be in driver’s education class until the following semester.

57. Honeymoon Suite – “New Girl Now.”  The fact that this song peaked here, at #57, is downright criminal. This is an excellent record.

56. Culture Club – “The War Song.”  This catchy number is making its debut this week.  We had a habit of changing the lyrics to popular songs in school, and I think for this one we just substituted each other’s names for the things named in the song. “Dave… is.. stupid… and Bill is stupid….”

49. Cyndi Lauper – “All Through The Night.”  I took a chance after hearing “Girls Just Want To Have Fun” and bought the She’s So Unusual LP.  That made me hip to these songs first, which was rare. This one’s making its debut this week.

43. Ray Parker, Jr. – “Ghostbusters.”  There was a theme to our Homecoming game that year – “Spartanbusters.” It became all the rage to put red circles and slashes over things. There was a poster that was put up in the school that caused consternation: a drawing of a cherry with the red circle and slash.  That was the end of the theme.

36. Lionel Richie – “Stuck On You.”  I am sure that this was a slow dance at Homecoming, and just as likely a slow dance song played at the Friday evening sock hops. Who danced with who during slow songs at sock hops became a major point of discussion. So, hearing this song, and asking someone to dance – that could be a hot topic the following Monday morning.

32. Wham! – “Wake Me Up Before You Go-Go.” An eventual #1, it’s just hitting the Top 40 this week.  This one was subject not only to our clever alternate lyrics (“Knock me up before you go-go”), I also posed the question one day at lunch: what would it sound like if Dylan did it?  I should have recorded it.

31. Dennis DeYoung – “Desert Moon.” Growing up in the southwest suburbs in the 80s meant that Dennis DeYoung sightings were common.  Once, while I was working at the Kroch’s and Brentano’s bookstore in Orland Square Mall, he came in to purchase a few items. It was the first time I’d ever seen an American Express Platinum card.  Anyway – this solo effort from him should have been a bigger hit, since it’s a great record. It only made it to #10.

28. Prince – “Purple Rain.”  It’s the debut week for this record.  It was another favorite at the sock hops, but it’s a long record.  If you decide to dance with someone to this one, you’d probably better be picking out a china pattern.

21. Rod Stewart – “Some Guys Have All the Luck.”  It would be years before I’d realize that this was a remake of a song by the Persuaders, which is the version that I prefer.

18. Night Ranger – “When You Close Your Eyes.”  I think that if I were to make a 1984 mixtape today, this would have to be on it.  For some reason, this is one of the songs that always make me think of that particular time. It also should have been a bigger hit, stalling at #14.

16. John Cafferty & the Beaver Brown Band – “On the Dark Side.”  Since we were Springsteen fans, we rejected this record in favor of the real thing.  That caused consternation when a girl tapped you on the shoulder as “Tender Years” began, though.

10. Bruce Springsteen – “Cover Me.”  Just about everything released from Born in the USA charted, which was unfortunate as not all of the songs were really solid.  I’d have much rather traded “Darlington County” and “No Surrender” for this one and “I’m Goin’ Down,” but the charts aren’t fair.

9. Scandal featuring Patty Smyth – “The Warrior.” I had a crush on Patty Smyth upon first viewing the video for “Goodbye To You,” which should get its own post. I also remember a girl at a sock hop knowing all of the lyrics to this one and wanting to meet her immediately.  It’s interesting to think what ranked as positive qualities in those days.

8. Madonna – “Lucky Star.” 1984 was the year that we all got to meet Madonna Ciccone, and this was one of the songs that we heard a lot.

7. Sheila E. – “The Glamorous Life.” A good number of Prince’s entourage had hits on their own, and Ms. Escovedo peaked this week with this one.

6. Chicago – “Hard Habit To Break.” It’s a slow dance, but it’s a little intense. It would have been hard to make small talk over that brass section.

4. John Waite – “Missing You.”  A slow song, sure, but it’s not exactly the way to get a relationship started. A girl I knew in high school once had a guy sing this to her, clearly not understanding that the chorus out of context has the opposite meaning he was likely trying to convey.

3. The Cars – “Drive.”  It was during our sophomore year that the Andrew Safe Rides program was started.  It was a service that high school kids could call if they or their driver had gotten drunk at a party, and a volunteer would pick them up and get them home safely. (All this despite one of the school’s health teachers asserting that we were fortunate “not to have a drug or alcohol problem in the school.” She should have worked the Safe Rides desk.)  We thought that this would have been a good theme song for the program.

2. Stevie Wonder – “I Just Called To Say I Love You.” In which Stevie sings the calendar and gets a whole lot of awards for it. I think the treatment that this got in High Fidelity is more on target.

And, at number one this week:  Prince –  “Let’s Go Crazy.”  THIS is the song that reminds me of high school sock hops, more than any ol’ slow dance. It was usually the first song of the night played by the DJ.  Get it?  We’re gonna go nuts!  They’d all start the same way – a DJ trying to fire up the crowd:

DJ: “All right – let’s get this party started!”

There wouldn’t be much in the way of patter until the inevitable “All right, we’re gonna slow things down just a little bit…” which usually sent us off the dance floor in a hurry, wondering why that tap on the shoulder wasn’t going to happen, looking at everyone else standing around the perimeter thinking the same thing, but all of us knowing that a simple act of a slow dance would lead to having to answer a lot of questions in home room on Monday.

Remember when that sort of crisis was the hardest thing you had to deal with on a Friday night, or any night for that matter?  Maybe that’s the value in this chart. I’d think of more, but, you know, grading to do, bills to pay, taxes to file….