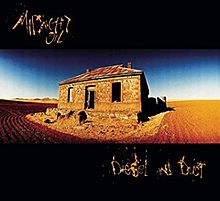 (Above: LP cover for Diesel and Dust.)

A few days ago I wrote about the process of going through old college airchecks and finding great lost songs – the ones that we played a lot on our college station, WLRA, but didn’t seem to get the sort of chart popularity that they should have.

I’ve dug up another great one today.  Midnight Oil seemed to come out of nowhere in early 1988, at least to American audiences.  They’d been playing together in their native Australia for sixteen years before that under various names, so for the band success was an arduous process. Things started going in the band’s direction in the mid-80s with the release of their LP 10,9,8,7,6,5,4,3,2,1, which did well down under and managed to get the band noticed by college stations in the US.  1987’s LP Diesel and Dust, however, is the one that really got the ball rolling over here. The first track from the album, “Beds are Burning,” was all over the radio by early 1988. We didn’t necessarily understand the underlying politics (the rights of the Aboriginal people) they were singing about, but it was catchy.

Finding the LP led me to a song that I played a lot – “The Dead Heart.” (It was one of the songs played on the November 14, 1988 morning show blogged about here. ) I also remember hearing it quite a bit on WLUP in Chicago.  (Here’s where I may be losing my memory.  Fans of Jonathon Brandmeier: Did he have a parody version of this song about himself?  It’s in my head and I can’t find it anywhere. I am sure that this existed.) When I got my morning show in the fall of 1988, this was a good go-to record that filled five minutes. There’s also an extended version on 12″ vinyl out there somewhere, possibly in my closet, possibly liberated from a college radio music library. While “Beds are Burning” did well, “Dead Heart” did not, stalling at #53 on the pop chart but appearing on the Modern Rock chart.

The follow-up LP, Blue Sky Mining, was much anticipated.  In my very brief stint at college station WIUS in 1990 we played “Blue Sky Mine” and “Forgotten Years” often, but neither of these crossed over to major Billboard chart success. (Actually, “Blue Sky Mine” made it to #47.)  What I remember most about “Blue Sky Mine” was the video featuring Peter Garrett’s bald head and changing the lyrics to “Who’s gonna shave me…”

This is a lost band story with a happy ending, though.  The band got back together in 2016 and began a world tour in April of 2017.  They’re appearing around the US now filling concert halls with Gen X nostalgia.

To hear “The Dead Heart” (and watch its cool video,) click here.