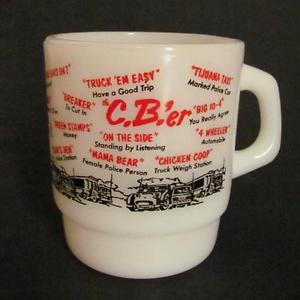 (Above: the sort of thing that might be in your grandparents’ cupboard.)

In the mid-1970s in America it was hard to escape the citizens band (CB) radio craze. A simple hobby allowing ordinary people to communicate back-and-forth with each other wirelessly (this was a pre-cellphone time, after all) became a national obsession almost overnight. T-shirts and items featuring the coded CB “lingo” were all the rage: I recall a kid in my neighborhood wearing a hat that said “What’s your 20?” to play baseball, having no idea what it meant. Books and records teaching you the “truck drivers’ language” and CB slang were for sale everywhere.

The phenomenon was just starting to pick up steam in 1975.  Ad agency employee Bill Fries noted that CB radios were most commonly used among truck drivers, and crafted a CB radio dialog about a parade of trucks gathering to run free afoul of the law.  The dialog was peppered with the lingo of radio usage, and “handles” (nicknames) for the speakers were used to identify them.  Eventually the trucks span the entire country, taking down the tollbooths in Illinois.  (Who says a song can’t have an antihero?) The narration between “Pig Pen” and “Rubber Duck” was released, with Fries using the name C. W. McCall.

The damned thing sold two million copies. I’d argue that it popularized yelling “Omaha” long before Peyton Manning did. “Convoy” was a #1 hit and spurred McCall on to recording other “outlaw trucker” songs, furthering a sub-genre of country music that was popular for a stretch at that time. While the attempt at a sequel – “Around the World With the Rubber Duck,” about pirates, inexplicably – was not successful, in total McCall hit the Top Country Singles chart twelve times.

Of course, we can’t just be satisfied with having a fad and letting it fade.  No, we need to take it to an irrational extreme.  The success of the song furthered the CB craze for a few more years. (The pet rock, which was popular at about the same time, didn’t have quite the same staying power.) The proverbial “jumping of the shark” was realized in 1978 with the release of the film version of Convoy, starring Kris Kristofferson and Ali MacGraw.  (Ernest Borgnine is in it for good measure, but we won’t hold that against him.)  Sticking with Smokey and the Bandit wasn’t enough; heck, sticking with Eastbound and Down wasn’t enough. We had to go and overdo it.

By the time I was in high school in the 1980s the craze had subsided.  Most of us were able to find CB gear either laying around in the garage discarded by a parent or neighbor or available at flea markets for pennies on the dollar. A few of us rigged them up in our cars and drove around in the summer talking back-and-forth to each other like our own party line.  (On one occasion I put on my best grown-up voice and broke up a classmate’s party, using Channel 9 to notify the police. The cops still monitored the frequency, it turned out.) The availability of cellphones have removed the need for these things; the one from my car is still sitting in the basement, having survived three garage sale attempts to rid myself of it.

Celebrate the 6th of June by driving in a long line.  You can hear “Convoy” by clicking here. (The link is now fixed.)