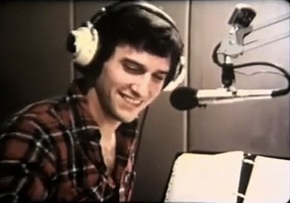 (Edited: It was announced this morning – June 26 – that John was voted into the Hall of Fame on the first ballot. Again we credit Robert Feder with the story, including a very John quote: “My first thought was: ‘I wish my parents were alive to see this.’ I am so grateful to the broadcast professionals who deemed me worthy of this unbelievable honor. Thanks to everybody who listened to me, everybody who worked with me and everybody who married me.” )

Word was spread this morning by Chicago media critic Robert Feder that the nominations for induction into the Radio Hall of Fame for 2017 are out.  That list finally includes the name of John Records Landecker.

Landecker has spent the better part of the last fifty years in and around radio stations with great success.  He’s best known for a long stint as nighttime jock at WLS in Chicago.  A generation of us who grew up in the 1970s with transistor radios hidden beneath our pillows did so in order to sneak a listen to what Landecker was doing on his show.  I, for one, should probably admit to a lot of my on-air persona being cribbed from John.  Had Larry Lujack, Bob Stroud, and Landecker not been on the radio, I have no idea what I would have ended up sounding like.

My students got a chance to meet John a few years back, and I’ve shared his work with students in my classes for years. The usual response from hearing his work is “Why can’t we have this sort of fun anymore?”  I always tell them that they can.  It’s up to the personality to bring, well, personality into a radio show. Many of them go away just a little bit inspired.

If you’re unfamiliar with John’s work, might I suggest starting here: Studio A: Profile of a Disk Jockey was shot by a Columbia College student in 1977, and in it you get to see John at work talking about his show and his life in radio up to that point.

Air check collectors may wish to listen to this recording from 1974 or this one from 1975. From this listen it’s easy to tell why so many young air talent wanted to be like John, and why so many of us couldn’t.

Personally, I got a chance to work with John at WJMK and got to see him up close and understand the amount of work that went into each show.  I was fortunate enough to do the show when he went on vacation (no one “fills in for” JRL). John was also an invaluable interview subject for my dissertation a year ago.  I also wrote this piece last fall on his Nixon material from 1974.

I’ll be watching very closely when the final inductions are announced later this year, and will be doing everything that I can as a radio historian to see to it that he gets in.  The Radio Hall of Fame is there to enshrine those that made tremendous contributions to the artform of radio, and recognition of the contributions of one John Records Landecker is long, long overdue.