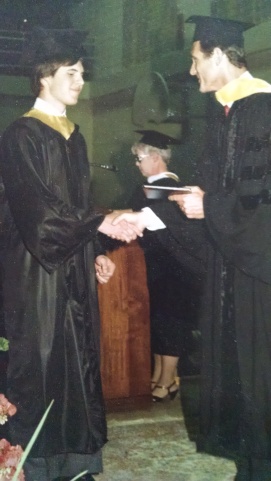 (Above: The author, 31 years ago, leaving high school.)

I’ve been to a lot of graduation ceremonies.  From eighth grade through earning my PhD last year I’ve had the opportunity to participate in several.  In my role as a faculty member at GVSU I’m invited to attend them every term.  I don’t go every time, but I’ve been to several of those as well to see students I’ve worked with reach the finish line.

Music is, of course, a big part of the ceremony.  The standard graduation theme – and one piece of classical music that just about everyone recognizes – is from Edward Elgar’s “Pomp and Circumstance.” Written in 1901, the portion of the work we know best – the “Land of Hope and Glory” – was performed at the coronation of Edward VII in 1902. The whole work is longer, but we just use the title for the chunk that is churned out by countless high school bands and brass ensembles at this time each year.

There’s a lot of music that we could be using.  Every few years, a song comes out that takes on a significance at commencement time, and that tie-in leads to chart success. (Note: I am not including Alice Cooper’s “School’s Out” on this list.  As much as I love the song, I get the sense that the band will have requirements to complete over the summer.)

“Graduation Day” – The Rover Boys (1956).  This one was the standard for grad pop songs for a long time, famously covered by the Beach Boys on their In Concert LP (complete with fake nose-blowing for emotional effect). This song made it to #16 in May of 1956.  Their only other chart hit, the somewhat ominous “From a School Ring To a Wedding Ring,” peaked at #79 later that year.

“Everyone’s Free (To Wear Sunscreen)” – Baz Luhrmann (1999). This weird narration from the summer of ’99 has an interesting history.  It began its life as a newspaper column written on June 1, 1997 by Chicago Tribune columnist Mary Schmich. The column has been variously attributed to a number of authors, including Kurt Vonnegut (who is said to have responded with “I wish I had written it.”) Luhrmann set it to music and had a hit on his hands, making it to #24 in time for grad season that year. It’s the sort of narration that hits a little harder when you’re older, which may be why you don’t often hear it on the soccer-mom stations that celebrate the late 90s today.

“Graduation (Friends Forever)” – Vitamin C (2000). This one borrows from a different classical piece normally reserved for weddings, Pachelbel’s Canon in D. (It also borrows a bit from Beethoven if you’re keeping score.) From a chart standpoint, it’s the most successful of the graduation-themed entries, reaching #12 on the mainstream chart in May of 2000.

My favorite of the bunch, though, is the subject song for this entry and a 45 that took me a fair number of years to track down, finally hitting paydirt at the now-defunct Car City Records in Detroit.  Don Everly recorded under the name Adrian Kimberly in 1961 and released a rather comedic take on Elgar’s composition. Complete with classroom bells, and a chorus chanting “No more pencils, no more books, no more teachers’ dirty looks!,” it livens up the march a bit. It also managed to make it up to #34 on the Billboard chart in June of 1961. Just once, of all of the ceremonies I attend, I’d like to hear this arrangement done on the way out.

You can get into the spirit of the season and hear Mr. Everly/Mr. Kimberly by clicking here.