25 years ago this morning the buzz in the sports world was Michael Jordan and Scottie Pippen both starting in the NBA All-Star game.  It was a Friday, so many were beginning to make their weekend plans.  And in Joliet, a 22-year-old kid was having the time of his life on the radio, despite not many others tuning in to hear what he was saying.

I haven’t kept all of my radio work.  One of the things we’ve learned through our work on the Radio Preservation Task Force is that the vast majority of radio history has been lost forever.  I once calculated – roughly – that I did over seven thousand radio shows in my career.  The total number of recordings I have may amount to two per cent of that. Storage media were expensive, both to store and keep.  I could either buy cassettes or buy beer, and at 22 opted for the latter far more often.   But some shows do remain.  This cassette was in a box in pristine condition.  I believe that I recorded the show, labeled it, threw the tape in a box, and forgot about it. 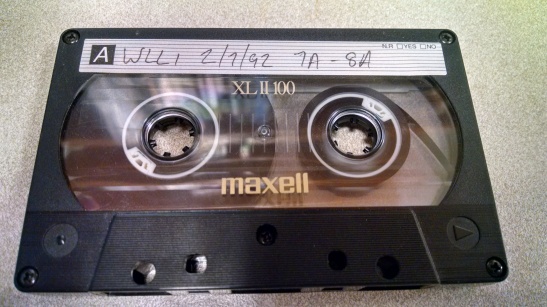 (Above: Kids, that’s a cassette tape.  Uncle Len has a lot of them.)

This weekend, while digging for other things, I found this and digitized it.  Let’s see what we’ve got here:

-A note about the radio station is in order.  WLLI, or “I-Rock” as it was called, morphed from a Top 40 in the late 80s to an “adult hits” station by the time I got there in 1991. We were ahead of the “classic hits” curve, I guess, in that the station still felt like a Top 40.  In short, I was allowed to talk over the records if I wanted.  A pure classic rock station would never dream of defiling the music in this way, but I thought it was fun.

In terms of direction, that was about it.  I had a playlist provided each morning from the satellite provider.  The station was on the bird nights, overnights, and much of the weekend.  I was supposed to follow that list, and I deviated from it more than I didn’t. Our program director, Tony Ray, had his hands full doing mornings on sister station WJOL and keeping the building in line.  That gave me tremendous leeway to make basic programming mistakes, which are all over this show. Then again, I was awfully young to be doing a morning show – so young, in fact, that the local newspaper thought it was a bit of a novelty.

-The recording opens with me talking over REO Speedwagon’s “Roll With the Changes,” billboarding three upcoming features, soliciting phonecalls, sending out a request, and hitting the post on the vocal. That’s about four things too many for an intro, I think. (This part of the tape appears to be unscoped, so it’s progressing in real time.)

-5:30: Yet another promo for a contest. From there it’s the “Stupid Crime Stories” bit, which  features the original “Mission: Impossible” theme.  (Years later I’d fight with a PD about using that music for the bit.  He thought it should be the theme from “Police Squad.”  I argued more people in the demo knew the TV show.  I just liked to fight about these things, I guess.)

-8:20: Sports report time.  Bed switches this time to Gary Glitter’s “Rock and Roll Part 2.” The Bulls were the big story, so that one makes sense.

-10:45: Tease for the “Elevator From Hell” feature.  I essentially stole this bit from 97X.  It was a subscription bit that provided elevator music versions of rock songs, and listeners guessed the songs in order to win gift certificates to a record store. Everything about this show is heavy on production elements: beds, buzzers, fanfares, etc.  The station was all cart machines (12, if I remember right) – music too- so everything had to be cued up in advance.

The song was “Heat of the Moment” by Asia, which we play after the bit.  Eight minutes without music. We then get two songs, as “You Really Got Me” follows a sweeper.

-19:00: A billboard for “Len’s Record Collection” while we wait for the traffic report.  WLLI used Shadow Traffic, whose reporters were downtown.  Diana Berryman was the reporter assigned to my show, and she was fun to work with.  I’d dial her phone, and she’d jump in when she was done with the other station before my window.  Sometimes I’d have to stretch to make it work, hence the promo.  (Instrumental version of “Dirty Diana” serves as the traffic bed.) Traffic is followed by commercials.

-23:00: Computer Cash Call.  This personifies small market radio.  Callers pick a sponsor from a list, and the “computer” picks one at random.  You match, you get money.  You don’t, the jackpot increases. The whole thing is done live. The jackpot is at $11 this morning, and the listener didn’t win – so tune in later today for a shot at $13.  Inexplicably, this feature was THE most popular thing the station did.  People loved this stupid game.  Don’t over-rate simple.

Live weather and back to music – forecast and news tease over the intro to T. Rex’s “Bang a Gong,” which segues to “Talk To Ya Later” by the Tubes.

-34:12: Tease again for Len’s Record Collection and introduction of Randy Bunger’s newscast.  Unemployment is at 7.1% nationally and 8.2% in Illinois. Maybe that explains the clamoring to win $11.

-36:35: Back to music with Journey’s “Any Way You Want It” and “Legs” by ZZ Top.  More teases occur over the ZZ Top intro.  This show is one long promo for something.

-40:25: The tape shifts to a skim here, so things move faster.  Out of Toto’s “Hold the Line” we get another traffic report.

-44:05: I’m doing a commercial for a Nissan dealer, over Springsteen’s “Born In the USA.”  I doubt we paid the licensing on that, and I am not getting the concept.

Next promo is for the noontime request show, live from Heroes and Legends.  Apparently after the show ends at 10 I am headed to host the noon hour from a bar.  I remember these being particularly long afternoons with many beers after 1pm.

-46:25: The “Len’s Record Collection” feature.  This was where I dug up something old from outside the format so we could mock how much we secretly liked it.  Today it’s “Afternoon Delight” by the Starland Vocal Band. Later, when we got a new station manager, he insisted that I trim the bit to only playing the first 30 seconds of the song from the collection.  These were almost always requests, and people wanted to hear the whole song. I think it was about that time I started looking for a new job.

-54:00: Coming out of “All You Need Is Love” with a weather forecast.  (“Mom called and it’s snowing in Orland Park.”) Tease for a bit in middays, and a bit about “Lifestyles of the Rich and Famous” that features a terrible Robin Leach impression. Comedy jokes! From that it’s right into sports and commercials, tease for traffic and birthday list, and back to music with Lynyrd Skynrd’s “What’s Your Name.”

-1:01:00: Last look at traffic for the morning, and a few songs: “Wrapped Around Your Finger” by the Police, “This Beat Goes On/Switchin’ To Glide” by the Kings. One of these was definitely not on the satellite list.  Randy does the last newscast, and it’s time to shift into “more music” mode after 9am.

-1:09:00: John Fogerty, “Centerfield” into Todd Rundgren’s “Bang the Drum All Day.” I think I’ve hit every damned post this morning. Sweeper into U2’s “With Or Without You.”

-1:14:47: One of my favorite talkovers of all time.  Over the intro to Elton John’s “The Bitch Is Back” : “96-7 I-Rock, don’t forget to join me today from noon to one at Heroes and Legends for the Fun Time Lunch Time Rockin’ Diner request show. I’m gonna be down there  taking your requests and playin’ ’em back over the radio, which is a lot easier to do than playing them back over the TV.” Post.

-1:18:42: Backsell, promotion for yet another remote.  This time afternoon host Tom Orlando is on the road with something called the Fantasy Chamber where you get money. Birthday list and “this day in history” follows.

Back to music with Billy Joel’s “We Didn’t Start the Fire.”  At 1:25:37, I followed this with something amazing: a parody of the same called “We Love Barney Fife,” which is all about the Andy Griffith Show.  I don’t recall where I stole this from. The quality of the recording isn’t good, but this is damned funny.

-1:28:29: More comedy jokes: A story about the first strip club in Romania.  It’s a celebration of capitalism. Promo for my appearance again (in my own voice), commercials, Greg Kihn’s “The Breakup Song, and then the show is over. I introduce Lenny Svoboda (we had two Lens at the station!) over the intro to Modern English’s “I Melt With You,” and go find lunch.

It’s a little disorganized, it could use with a decluttering, but this genuinely sounded like a whole lot of fun was being had. I joked that there was no audience for this show; I know that this was not the case, because I would hear from them often. They’d come to the remotes, they’d send faxes in a pre-email world, they’d dial in to play the stupid Computer Cash Call. They liked the station, and I had fun with them.

Radio used to be a lot of fun.  When can we go back to silly, entertaining fun again?

I am willing to share this as an experiment.  You can hear it here: