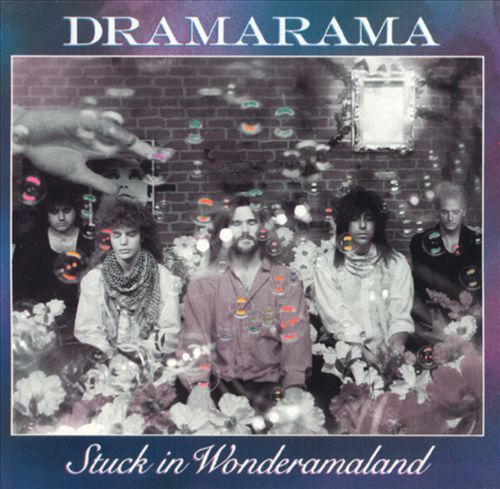 (Above: Cover art for Stuck in Wonderamaland, 1990)

I was never really a smoker. I was in the habit of buying cigarettes only when working at my first job, which I fondly think back on as “petroleum distributor.”  To be correct, I had exactly three jobs that were not in radio:

At the first job I was given the duty of not only manning the full-service pumps, but also working the register.  This necessitated the sale of cigarettes, which were in a giant rack over my head. Being that I was sixteen at the time, I don’t think I was supposed to be selling them, but I was – so I figured that if I checked my ID, I could sell to myself.  (I know that is not how it works, but teenage logic is different.)  I started with Lucky Strikes, because if you’re going to smoke, dammit, then smoke.  From there it was Newport, and from there it was deciding, after three months, that I couldn’t justify $1.05 a pack and needed to kick the habit.  Possibly the best decision I ever made.

Once I got into radio, just about everyone smoked. At one of my early jobs it was suggested to me that I take it up so as to roughen my voice a bit. I declined, passing on the full success of rock radio.  Given the number of my peers who I saw pass on early from the complications of smoking, I’m glad I did.  I also know that it’s a tough, tough habit to break, which makes it a popular New Year’s resolution.

So what does that have to do with this song, other than the title? Not much.  This is a great record, though, that should have been a much, much bigger hit.  I discovered this song in early 1990 in my cup-of-coffee stop in Macomb, IL.  I enrolled in a class to gain access to student radio station WIUS, bailed out of the class, and then got hired by WJEQ in town as a weekend jock.  (I’ll touch more on that anniversary as it approaches in February.) WIUS was my first stop after bailing out of KRVR (another milestone that will get its own post, but was also written about here), and the transition from “beautiful music” to “progressive college rock” was a little jarring.  I did find some great music I liked, though, and this album was one of those.  The album had a song called “70s TV” that I dug but didn’t get a whole lot of airplay anywhere but on my show.  This one did, though, making #13 on the Modern Rock charts but didn’t cross over to the Top 40. It also contains one of my favorite rock lyrics ever:

“Check the sports and weather/and the living and the dead/You don’t have to read the headlines/You can hear what Johnny Carson said.”

27 years later, and we’re still expecting entertainers to explain the news to us.  Maybe we should resolve to stop that once and for all?

You can hear what Dramarama said by clicking here.