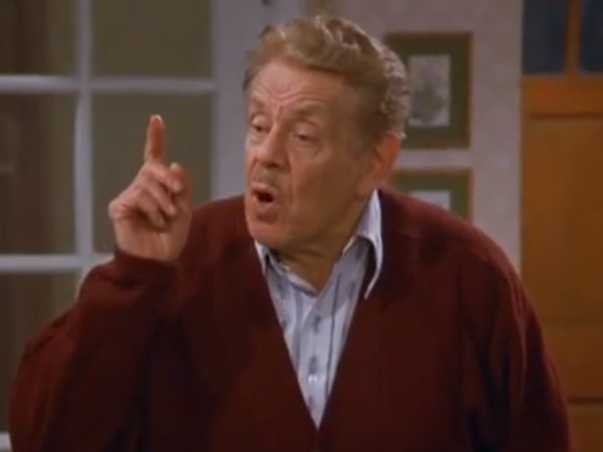 (Above: “I gotta lot of problems with you people…”

Say the word “festivus,” and most people with a handle on popular culture of the 1990s will know exactly what you mean.  The holiday, first introduced to the lexicon by Seinfeld (a show that added such phrases as “double-dipping” and “not that there’s anything wrong with that” to everyday speech), was an alternative to the gift-centric holidays of Christmas and Hanukkah widely celebrated. It’s been in the discussion ever since: some state houses have gone so far as to display Festivus poles along with other decorations.

Of all of the components of the holiday, the most widely-cited is “The Airing of the Grievances,” in which people gather and say what other people have done that have bothered them. Ironically, this was always a part of the traditional Christmas gathering; it just was never identified as such.  In the spirit of same, I now will air a few grievances I have with our holiday music traditions, especially as they relate to radio:

I. Problems in Song

-Presents “on the tree.”  Yes, I know that this used to be the tradition.  So was putting lit candles on dried-out pine trees, and we learned not to do that anymore.  Why are we still singing about this?

-Science problems.  In “I Want a Hippopotamus for Christmas,” Mom cautions against the gift, while “teacher says a hippo is a vegetarian.”  Listen to your mom, kid – the African hippo is the most deadly animal in the world in terms of attacks, and yes, they will eat you.

-Science problems, part 2.  There was a Flintstones Christmas special.  Roll that around for a minute and get back to me.  (Of course, there was always a B.C. comic strip about the Resurrection every Easter, and that makes even less sense given the title of the comic.)

-Christmas Songs That Aren’t.  “My Favorite Things” was sung to comfort children during a thunderstorm in The Sound of Music.  Shortly thereafter, it magically transformed into a Christmas song, despite having nothing to do with Christmas. Just because a song has snowflakes in it does not make it a Christmas song.  The stupid thing celebrates doorbells, which no one I know likes, and I’ve never heard carolers gather to sing Paul McCartney’s “Let ‘Em In.” This needs to be dropped from the canon.

-Scary Ghost Stories.  Andy Williams sings of these in “It’s the Most Wonderful Time of the Year.”  Dickens’ A Christmas Carol is the only one I know, and that’s had the scary taken right out of it by a singing Albert Finney. Are there families who gather on Christmas Eve and tell stories that keep the kids from getting to sleep?  I highly doubt it.

-Poor Gift Selection. I am not a parent, but I’ve spent some time around babies.  I know that you don’t want other kids banging on drums while you are trying to get them to sleep. If “The Little Drummer Boy” came within close range of my kid I’d be taking his sticks and sending him to play in the yard.

-Poor Word Choice. Can we get a rewrite on “Silent Night?” The song is lovely, but the part where we describe Baby Jesus as “tender and mild” has always been off-putting to me.  He is not a brisket.

-Lack of a Good Hanukkah Song.  I struggled with this every year as a programmer – what can I add to the rotation to acknowledge a major holiday that a) isn’t awful and b) doesn’t mock it in some way? I avoided that insipid Adam Sandler record because Adam Sandler, and songs like “Hanukkah Rocks” by Gefilte Joe and the Fish seemed to be too tongue-in-cheek.  (Unfortunately, Don McLean’s “Dreidel” isn’t about Hanukkah at all, and I didn’t want to get all “My Favorite Things” on the audience.)

-Winner, Most Annoying Song: “The Twelve Days of Christmas.”  This should just be done as one verse – give the whole list, and be done with it.  A list is not a song, no matter what Billy Joel tried to convince you to believe. Besides, you can’t legally obtain most of these things anymore. Even if you could, who has the room for such gifts?  It wouldn’t work, anyway – sooner or later the lords-a-leaping are going to introduce themselves to the maids-a-milking, they’ll leave together, and you’re left with cows.

No, if we’re going to have to endure “The 12 Days of Christmas,” there’s only one serious attempt at performing it that I can stomach, and it’s not even that serious.  John Denver and the Muppets created one of the greatest-ever Christmas albums, and their version – despite how I don’t find Miss Piggy to be the slightest bit amusing – still brings a smile, the same way it did when it played out of my parents’ hi-fi.

What do I prefer? The various parodies of this song.

–Allan Sherman struck first, with a satire about more practical gifts, and then returning them all after Christmas.  Too real.

–Bob and Doug McKenzie boiled it down to what we all really could use: a beer… on a tree.

But Seattle DJ Bob Rivers wins the prize.  His Christmas parody albums are among the finest ever done, and back when I looked to fill time around the holidays I would go to his work often.  The one that hit home the most for me was the first song on the first album. He goes through all of the things that are difficult about the holiday season.  The angry guy dealing with the lights?  That’s me, as was my father before me, and so on.  (“Now why the hell are they blinking?”)  Fun fact: I did once play this at a station during our campaign with the Salvation Army, and even they thought it was funny.

Take a minute to air grievances with Bob by clicking here.

4 thoughts on “12+ Blogs of Christmas, Airing of Grievances Edition: Bob Rivers, “The Twelve Pains of Christmas” (1988)”