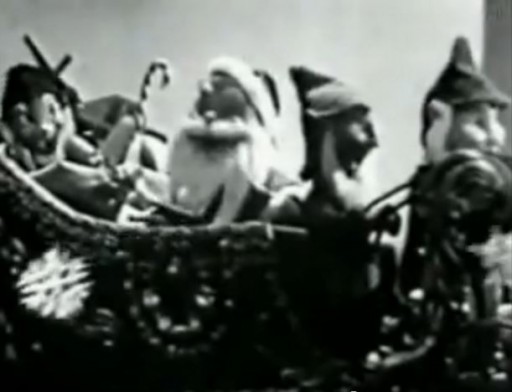 (Above: It’s not Christmas without these puppets.)

You can take the boy out of Chicago, but you can’t take Chicago out of the boy.

Get in a discussion with anyone of a certain age about growing up in Chicago, and the discussion inevitably turns to local television, especially for kids. It’s amazed me how many of the people I grew up in radio with point back to The Ray Rayner Show as one of the reasons why they wanted to go into media.  If you’re not familiar with it, Ray hosted a morning program that showed cartoons, featured sing-a-longs, starred a live duck that ate corn flakes, sported a segment in which Ray and an oversized dog puppet traded puns, and – most importantly – gave you sports scores and a weather forecast with advice on how to dress.  It’s no coincidence that when I began in radio I felt that filling people in on what they missed while they slept and telling them what to wear to school was my most important function.  As Ray Rayner did for me, I wanted to do for them.

There were, of course, other shows: Garfield Goose and Friends, which featured the namesake puppet, who declared himself King of the United States, along with Romberg Rabbit and the only human who could understand them, Frazier Thomas. There was also Bozo’s Circus, which will get its own treatment on this blog at some point. But at this time of the year what stands out are two shorts that were only shown at Christmas: “Hardrock, Coco and Joe,” and “Suzy Snowflake.” It’s no secret that one of the highlights of the holiday TV season is when WGN airs Bozo, Gar, and Ray – a retrospective of these shows – and includes the Christmas short films.

Both films were produced in 1951. I’d say “animated” only in the sense that they are examples of clunky stop-motion animation that long predate the Rankin-Bass Christmas specials that everyone in their forties can recite word for word.  “Suzy Snowflake” features a sort of fairy princess that ices everything up.  Long before kids clamored to be Elsa from Frozen, Suzy was bringing winter around town.  (You have to be a kid to appreciate this.  As you get older, and lose feeling in your ears as you scrape the windshield in order to be able to drive home, you catch yourself cursing Suzy’s existence.) The song (without the video) gained traction when it was recorded by Rosemary Clooney.  (Younger readers: that’s George’s aunt.)

For my money, “Hardrock, Coco, and Joe” is the more memorable of the two.  There’s so much that’s strange about this video.  Not Clutch Cargo strange, but strange all the same. For one, Santa is, well, clearly stereotypically Asian. 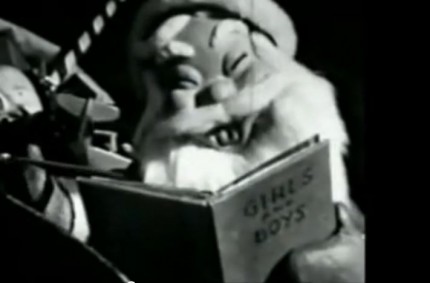 This seems oddly inclusive for 1951. But what’s really going on here is a better story.  The production house that made these, Centaur Productions, employed Wah Ming Chang as its animator.  This is the same guy that did the dinosaurs for Land of the Lost and built the time machine for the 1960 movie of the same name (that ended up in Sheldon and Leonard’s apartment on The Big Bang Theory.)  I suspect that Chang simply created Santa to look like the one he may well have seen as a kid. The vocal track is credited by the Les Tucker Singers, but they didn’t really sing on the film, hence the asterisk above.  Instead, they sung on the record, that you could get at Walgreens (as promoted on Garfield Goose and Friends), so there’s a slight difference between the original film and that 45 you have in with the Christmas decorations.

There’s also the lyrics, which make you feel sorry for one of the puppets right off the bat:

“Now Hardrock’s the driver up there by his sleigh

Coco reads maps and he shows him the way

Though old Santa really has no need for Joe,

But takes him ’cause he loves him so.”

What. The. Hell?  No need for the guy?  Really?  Then why was he put in the song in the first place? I mean, they didn’t even give him a clever catchy name – just Joe. Now you have to feel sorry for the guy, and hope that he isn’t getting screwed out of benefits at the next negotiation.  The Oak Lawn Patch did a nice piece on this film with some interesting trivia as well.

It wasn’t officially Christmas until these came on the TV, and, years later, after the airings stopped, the occasional disk jockey with a fond memory of childhood would play them on the radio. Like many holiday traditions, they’re hokey and corny, but you wouldn’t fully enjoy the season without them.