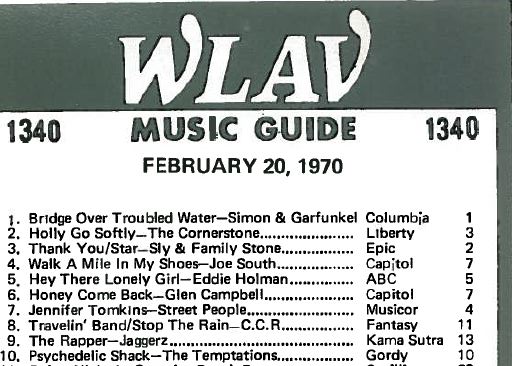 You wouldn’t likely predict that a song about a young man trading sex for money would have been a big hit in the conservative burg of Grand Rapids, Michigan in early 1970. But that’s exactly what happened when “Holly Go Softly” by the band Cornerstone made #2 on WLAV and #3 on WGRD in February of that year.

In part, this is why the study of local pop music charts is so fascinating. How can a song that fails to make the Billboard Hot 100 – that is NOT by a couple of kids who grew up in the town and formed a garage band – make it so high up the charts? We have to think back to a time where a program director and/or a music director still could hold sway in terms of what got on the air. By 1970, consultants were having their way with paring down the number of songs that got airplay.  One of the unexpected results I drew out of my dissertation on 1960s pop music was that after about 1966, the sheer number of songs to see airplay on stations in my sample shrank. This roughly coincided with the rise of the radio consultant at that same time.  If other stations weren’t playing a song, you weren’t, either – and it took a lot of guts to break the mold. The same thing happened with Australian Nick Lampe’s “Flower Garden,” which actually made #1 on both stations.

Listener support could do this.  But it would make sense that the phones would be stronger in support of local kids in Grand Rapids than a bunch from Arizona, which is where Cornerstone came from. So why this song? Well, it’s impossible to explain personal taste, but I can see how this was a hit.  It’s catchy, even if the lyrics are a little strange. In the song, our protagonist has a girlfriend that he is in love with, but he needs to hide her from Mrs. Kingsley, the wealthy older woman he sleeps with who provides him with the money he isn’t earning in the theater. (Apparently the girlfriend is OK with this, although we never hear her side of the equation.) At a time when the Jackson Five had been singing that love was as easy as A-B-C, Cornerstone was explaining that there are really several other letters involved in the process.

You can discover this song, if you aren’t familiar with (or forgot) it, by clicking here.