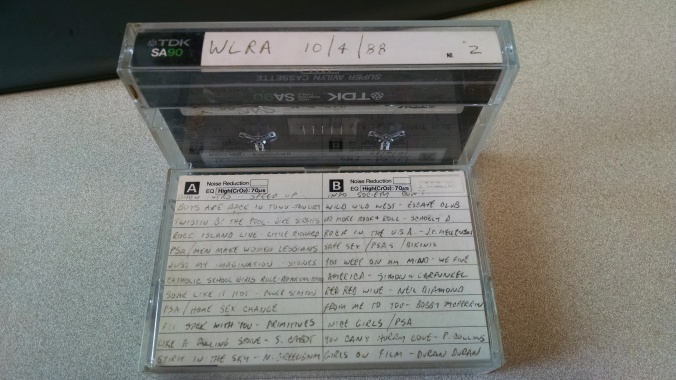 I never wanted to be the morning guy.

I’m naturally an introvert.  What might have been appealing about radio to me was the fact that I could have some alone time.  I was also happy with not being the center of attention all of the time. In grade school I was often singled out for made-up awards like “best reader” or something like that.   I wanted to fade into the background a little bit. I would have been perfectly happy being the Bobby Skafish or Bob Stroud to someone else’s Jonathon Brandmeier. Let someone else do the wacky, crazy, over the top stuff: I’d just like to share some of my records with you.

But college radio changed that a bit. In the fall of 1988 I agreed to work every morning on our station at Lewis, WLRA.  The 8am – 10am window is a hard sell for students.  Even today it is rare that anyone volunteers to take that shift.  And here I was, doing it several days a week, commuting in to do so (I was still living in my parents’ basement off campus). I was in my third semester on the station and by then had served as program director and operations director. My burgeoning ego was being fed plenty, thank you, and then they had me become one of the “stars” of the station.  (Who am I kidding?  The stars of WLRA were the guys that did the dance programming at night.  Guys like Derrick Brown, who now heads urban programming for iHeart. Guys like Cowboy Collins, who spent the past 18 years on the air in Atlanta.  We had a pretty decent radio station.)

Despite a lack of understanding that jokes need to be funny to the audience and not just to the person telling them, I got the morning show.  My format was simple: play a three song set and read something from the Weekly World News or the local paper.The three songs usually followed a theme as well: something new, which the station management felt should be played, something older, which I preferred, and something positively ridiculous. I worked more Sebastian Cabot and William Shatner recitation in the show than should have been allowed.  Hell, the theme song for the show was “I Like Bananas (Because They Have No Bones)” by the Hoosier Hot Shots. Some jokes are just for me.

I managed to save a bunch of shows from that fall.  I may have one of the largest collections of WLRA airchecks in the world, and, unfortunately, they are all of me.  I kept my weekly shows in a box for years and many of the daily shows survived.  There were some days that I didn’t have tape, and those shows were lost to the ether.  But October 4, 1988 lives on.  What was played that morning? Among the highlights:

“Twistin’ By the Pool” – Dire Straits.  This is still a great song. Radio should play it now.

“I’ll Stick With You” – The Primitives.  I was famously wrong about this band.  When I heard their album (and saw Tracy Tracy on the cover), I was convinced that they would be the Next. Big. Thing.  It wasn’t until they used “Crash” in Disney’s  Cars that they caught on.

“Like a Rolling Stone” – Sebastian Cabot.  There’s a cow mooing over this for some reason.

“Red Red Wine” – Neil Diamond.  UB40 was on the charts, so this was played to be rebellious.

“Bust Some Heads” – Bouncing Off Bob.  Shoulda been a hit. Also not appearing online.  I may need to upload it before your next department meeting.

“I Bet You They Won’t Play This Song On the Radio” – Monty Python.  Challenge accepted.

In between these were other much better records and hastily prepared bons mots by your affable host, who hadn’t quite lost his Chicago accent (from over by dere!) and was yet to reap the benefit of a second voice change that happened around age 22. But I was, in fact, the morning man – a role that I would reprise full time for six stations and as a fill in for many others.

It’s not the sort of show that you look back on and think “This guy is going to manage a career.”  Then again, maybe it was.  A week later I got off the air and received a phone call from one of the local stations in Joliet, WJTW.  I had applied there for a sales job, thinking it would be a decent foot in the door in the industry.  I only had one reference in the industry: my college radio advisor, John Carey.  In one of the best/worst references ever given, John responded to their phone call by telling them that I would be terrible in sales.  “He has no aptitude in that,” John said.  “But he’s good on the air.  You need to have him on your radio station.  In fact, he’s on right now…” So, they listened, and heard, and called me in for an interview, and eventually hired me to do weekend overnights.  Had I not agreed to do that morning show, the rest may not have happened. I could have been in college radio forever, playing Mae West singing “Twist and Shout.”

You don’t have to merely take my word for it – the scoped version of the show (songs are edited out, but comedy jokes and PSAs are left in) is available here. This is not for the squeamish.