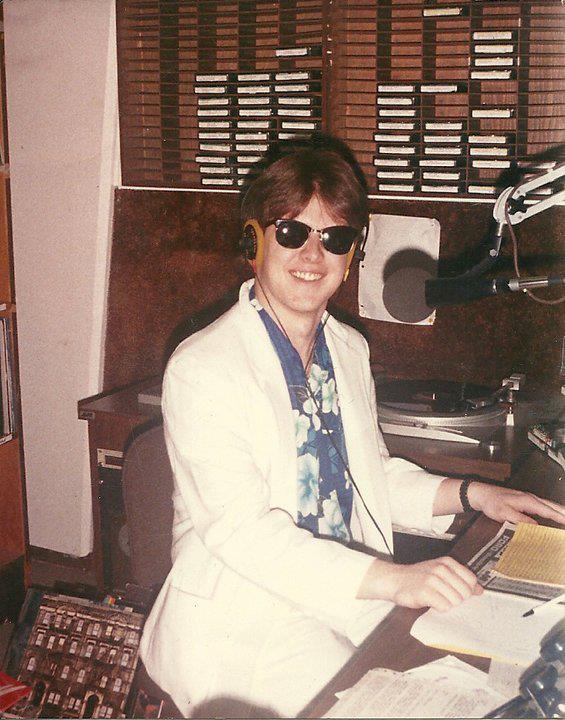 (Above: Me in the WLRA studios, sometime in the Miami Vice era.)

In yesterday’s post I waxed poetic (wax on, wax off…) about college radio and my time at Lewis University’s WLRA.  My time in college was far from traditional. In my fourth semester at Lewis, I decided to forego my college eligibility and turn pro. (When athletes do it, we understand.  When some 20-year-old punk kid does it, we pronounce that his act is not together.) It wasn’t until 2004 that I returned to finish my degree, and then move on to incurring impressive student debt in the name of graduate school.

Although I only worked for WLRA for two years, they were some amazing times. Without the experience of moving from new disk jockey to program director to morning host to getting to “the show” in Joliet at WJTW, my career would not have happened. Yet I ended  up leaving radio for higher education in 2012, which was really the end game of returning to school in 1999. Maybe, in a real sense, I just wanted to go back to college radio.  I did exactly that when I became the faculty adviser for WCKS The Whale, the student-run station at GVSU.

In my role as adviser I get to meet a lot of students who want to try radio, and some want to try a career in it. I am all too happy to share my stories, and I do get asked about them often. One of my favorites involves my first day on the air in 1987, and my last day in full-time radio in 2012, and how they are connected through the same song.

I showed up at Lewis not really knowing anyone.  I had always had an interest in radio (a story for another day) that I never did anything about until the fateful afternoon I wandered into the basement of Fitzpatrick Hall and asked for a radio show.  I was placed on Saturdays at 2pm, which I thought was huge – until realizing that most of the campus went home on the weekends.  In any case, I was brought in to be trained on Friday, September 4. I was shown the basics of running the board during the show of program director Stan Wysocki, who said “I need to go and make a phone call… I’ll be right back.” Stan was gone for 45 minutes. As the record ended, I stared at it, and realized “I need to do something here.”  So, I spoke, and played the next song.  Training over.

That first song was “I Still Haven’t Found What I’m Looking For” by U2, off the hugely-popular Joshua Tree LP. That happy accident made it the first song I played on the air anyplace. In fact, on my first regularly-scheduled show the next day, I opened with it again for luck.  I don’t have a recording of the train wreck that surely was 9/4/87, but the entire show of September 5th is carefully preserved with my airchecks chronicling a career. (It is its own train wreck for other reasons. The Aerosmith/Debbie Gibson combination I mentioned yesterday happened on that show.)

Fast-forward to July 28, 2012.  I was coming to the end of my string as program director of Grand Valley’s WGVU-AM “Real Oldies,” a station that I helped to create when Grand Rapids lost its commercial oldies outlet to poor corporate decision-making.  I was leaving because a few months earlier I was asked if I would “entertain” the idea of teaching full-time as a visiting professor in the Broadcasting department at GVSU.  As one administrator put it to me, “We like to have all of the players in the right positions, and your value to the university might not be sitting in a room playing records.”  I happily accepted the role, understanding that it effectively ended my full-time radio career after 25 years.  I pre-recorded my last show, knowing that I wouldn’t get through a sign-off without some emotion.  I talked for a minute or two, insulted some folks, thanked others, acknowledged the sacrifices made by friends and family, and then tore into the final song I’d play.  I broke format (what were they going to do, fire me?) and added a particular 1987 track to the 50s/60s/70s station.  The career had come full circle.

In 2015 some students of mine asked if they could interview me for a video piece on people’s favorite records.  I explained that picking a favorite record for me would be like picking a favorite child, but I understood the assignment.  We used the U2 song, and I told them this same story.  The video project (thanks to Ellie Stiles at Kingston University in London for the link) can be seen here.